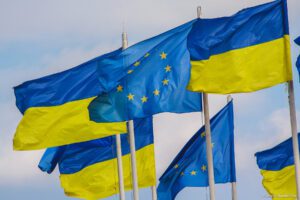 Prime Minister Denys Shmyhal says that Ukraine is not only significantly expanding its export opportunities, but also continues to integrate as much as possible into European projects.
“We are not only significantly expanding our export opportunities, but also continuing to integrate as much as possible into European projects. This is very important on the way to our full membership in the EU,” Shmyhal said at a government meeting on Friday.
The prime minister said that on May 12, the European Commission announced the creation of “Solidarity Lanes,” a route that would speed up exports and the work of customs between Ukraine and the EU.
“In order to speed up logistics, the European Commission will also create a special platform for simplified border crossings across the solidarity lanes and encourage EU market participants to provide additional trucks and other transportation capacities,” he said.
In addition, Shmyhal said the European Commission had already decided to conclude an agreement with Ukraine and update the map of the Trans-European Transport Network (TEN-T).