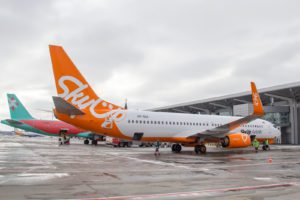 The Ukrainian airline SkyUp on June 4, 2019 launched flights from Odesa to Kutaisi (Georgia), Odesa airport said on Facebook.
Flights will be operated weekly on Tuesdays and Fridays. Departure from Odesa is at 21:20, back at 19:20. The flight duration is two hours.
The cost of a one-way ticket without baggage starts from UAH 1,800.
As reported, SkyUp launched regular flights from Kharkiv to Odesa.
As of June 2019, SkyUp’s fleet had six aircraft, including four medium-haul Boeing 737-800 NGs with 189 seats and two medium-haul Boeing 737-700 NGs with 149 seats.
In October 2018, SkyUp received the TCO certificate, which allows performing flights to 28 countries of the European Union, as well as to Switzerland, Norway, Iceland, and Liechtenstein.