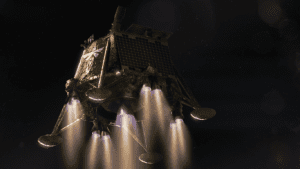 NASA has confirmed the readiness of the Blue Ghost moon lander of the American company – the developer of rocket and space technology Firefly Aerospace Inc., owned by Ukrainian businessman Max Polyakov, in accordance with the schedule of the Artemis lunar mission – by September 2023. Polyakov’s press service said Firefly Aerospace has reached a milestone in the project by successfully completing the Critical Design Review (CDR) phase of the Blue Ghost moon lander. Completing the CDR paves the way for building the Blue Ghost lander.
According to the Artemis lunar mission schedule, the moon lander is to land in the Mare Crisium lunar basin in September 2023. The module will deliver ten NASA payloads to the lunar surface, as well as several commercial cargoes.
This mission is a harbinger of what we see in the future: the growing number of repetitive lunar maintenance and payload delivery missions that will lay the foundation of the lunar economy. We are honored to demonstrate our ability to provide such services to NASA and our commercial customers, Firefly CEO Thomas Markusic said.
It is noted that the Blue Ghost will monitor the safe delivery of the payload during transit to the Moon and in its orbit, as well as on the surface of the Moon. The vehicles delivered to the surface will investigate the properties of regolith, the geophysical characteristics of the surface, and the interaction of the solar wind and the Earth’s magnetic field. In addition, several demonstrations of key technologies related to navigation and sampling will be conducted during the mission.
The Blue Ghost mission opens up new opportunities for Firefly Aerospace to cooperate with NASA and other partners. We are proud of the high appraisal of our partners from NASA and are glad that we can join such an ambitious international program as Artemis, Max Polyakov said.
In his opinion, the Moon is extremely important for the more distant missions of mankind – it should become a kind of base, a fort, where the necessary resources will be produced in the future.
In such exploration of the Moon we see one of the strategic goals of the company, he added.