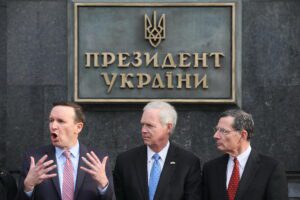 U.S. Senators Jeanne Shaheen (Democratic Party), Chris Murphy (Democratic Party) and Rob Portman (Republican Party) have pledged bipartisan support to Ukraine.
At a briefing following a meeting with President of Ukraine Volodymyr Zelensky in Kyiv on Wednesday, Shaheen said the senators paid this visit to express their bipartisan support to the people of Ukraine, independence and the progress that Ukraine has made in reforms, and they had a very effective meeting with the President of Ukraine.
According to her, their meeting with the president started with a briefing from people from the area of combat operation about the current situation there.
Shaheen said the senators have a very clear picture of the challenges that Ukraine’s troops and everyone on the front face. This will help them so that when the senators return to the United States, they talk about the continuing need to support Ukraine’s efforts.
Senator Rob Portman said they discussed with the president the importance of strengthening relations between Ukraine and the United States, providing even more effective military assistance so that Ukraine can defend itself.
Portman said they also talked about other assistance that the United States can provide, namely, in the area of economy, reform and countering Russian disinformation.
Senator Chris Murphy (Democratic Party, Conneticut) said that many have been done in Ukraine in a short period of time, but many serious challenges are still facing Ukraine. He said that the three senators will persuade colleagues in the Senate of the need to continue providing security assistance to Ukraine.
Murphy also said that ongoing reforms are also important to the U.S.-Ukrainian partnership. The senators spoke with President Zelensky about some specific reforms, namely reforming the SBU, guaranteeing NABU independence and continuing corporate governance reform.
Senator Shaheen said that Ukrainian Defense Minister Andriy Taran briefed the senators about Ukraine’s needs for weapons, and assured that she would inform Congress and the administration of U.S. President Joe Biden about them.
She also said that today the senators met with the Ukrainian defense minister, he was very specific about Ukraine’s weapons needs. The senators will convey this message to Congress and the administration in Washington, and they promised to continue supporting Ukraine’s security.