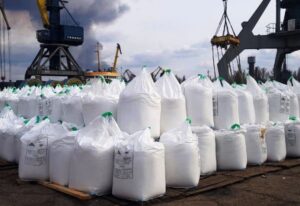 An investment project for the construction of a soda ash plant in the suburbs of Kramatorsk (Donetsk region) involves investments in the amount of $575 million, head of the Donetsk regional state administration Pavlo Kyrylenko said.
“We are ready to offer, with ready-made conceptual design solutions, a project for the construction of a plant for the production of soda ash […] earlier there were plants in Sloviansk and Lysychansk (Luhansk region), but the capacities have been lost, and another such plant is in Krasnoperekopsk in Crimea,” Kyrylenko said at the forum “UkraineInvest Talks: Dnipro” on Thursday, May 27.
According to him, this plant will solve the problem of import substitution and will allow talking about export.
According to the presentation of the investment project, the construction of a plant with a capacity of 600,000 tonnes per year is designed for three years, it is planned to create about 2,000 jobs there. The area of ​​the land plot is 50 hectares in the village of Raihorodok, stocks of raw materials will provide for 100 years of work. It is assumed that the implementation of the project will allow the supply of soda ash for export and will provide an inflow of foreign currency to Ukraine in the amount of at least EUR 75 million.
The head of the region also presented a project idea for the production of paper from chalk, a model of which was developed by the regional state administration. According to the presentation of the project, its cost is $10 million, the capacity is 9,000 tonnes of paper per year, the implementation period is ten months with the creation of 100 jobs.
According to the authors of the project, chalk paper can be 10-15% cheaper than traditional types of paper, it can decompose completely under the influence of sunlight within 6-18 months. The project is assessed as promising for a dry and ecologically loaded region with forest plantations and numerous chalk deposits.
Kyrylenko said that these projects are well developed and realistic.