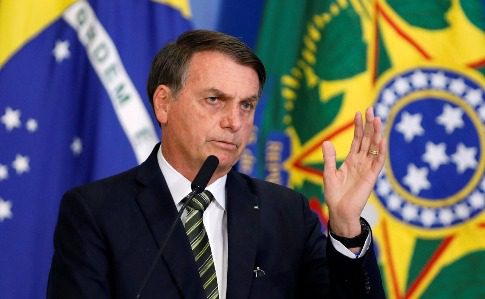 BRAZILIAN PRESIDENT TO VISIT UKRAINE IN 2021

Ukrainian Foreign Minister Dmytro Kuleba announced the forthcoming visit of Brazilian President Jair Bolsonaro to Ukraine in 2021, the press service of the Ukrainian Foreign Ministry said on Tuesday.
According to the minister, the visit of the President of Brazil to Ukraine should serve as an impetus for the development of the Ukrainian and Brazilian partnership. “It should open a new page in bilateral relations,” Kuleba said at the opening ceremony of the first Defense Industry Dialogue between Ukraine and Brazil in Kyiv.
The head of the Ukrainian Foreign Ministry said that consultations with the Brazilian side had already shown the interest of Brazilian defense industry enterprises in establishing a dialogue with Ukraine. “Brazil conducts such a dialogue only with five countries: Argentina, the United States, Portugal, France and India,” Kuleba said. The minister said the beginning of the defense dialogue is a component of the priority area of the Foreign Ministry to open up new opportunities for Ukrainian companies and industry.
“We are starting the dialogue between associations of industrialists and entrepreneurs of the two countries, between space departments, we are actively preparing the regular meeting of the Ukrainian and Brazilian commission on trade and economic cooperation,” he said.
According to the minister, cooperation between Ukraine and Brazil should not be limited only to bilateral trade, but also provide for ambitious plans for joint entry into the markets of third countries, in particular in Latin America, Asia, Africa and Europe. “This dialogue lays a solid foundation for mutually beneficial long-term cooperation between representatives of defense departments and enterprises of our two countries,” Kuleba said.