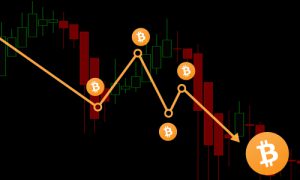 BITCOIN AND OTHER CRYPTOCURRENCIES DECLINE ON FRIDAY

Bitcoin and other cryptocurrencies decline on Friday, with some of the largest digital assets posting their biggest drop in weeks as risk appetite wanes, Barron’s writes.

Bitcoin has lost over 4% in the past 24 hours but is holding above the key technical level of $45,000. The price of the cryptocurrency jumped above this indicator last Sunday and continued to rise at the beginning of the week, rising above $48,000.

Meanwhile, on Thursday, bitcoin began to decline as investors exited risky assets, including cryptocurrencies and equities. By Thursday evening, its price had fallen more than 3%, showing the most significant one-day drop since March 10, according to Dow Jones Market Data.

“Bitcoin’s rally is fading, and the Wall Street session, which was accompanied by risk aversion, could lead to continued pressure on cryptocurrencies,” said Edward Moya, an analyst at Oanda.

The price of the most popular cryptocurrency at the beginning of 2022 was around $46,200 and remains well below the high of $68,990 reached in early November.

Meanwhile, some market participants believe that the fall in prices may be short-term, said Barron’s.

Meanwhile, the price of Ethereum, the second-largest cryptocurrency by capitalization, fell more than 3% below $3,300, also showing the largest one-day decline since early March on Thursday.