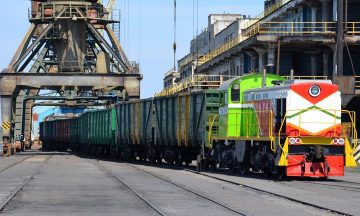 Mykolaiv Locomotive Repair Plant has reached an agreement with the leading machine-building company Liebherr on a long-term cooperation involving the installation of diesel engines on locomotives operating in Ukraine, as well as carrying out a number of works on railway transport, the plant reported on its official Facebook page.
The relevant agreements were reached during a visit by the plant management to the Liebherr production base in France and Switzerland.
“Liebherr is the world’s leading company in the mechanical engineering industry, and it was important for them to find a reliable partner in Ukraine in the field of locomotive modernization. Mykolaiv Locomotive Repair Plant has been implementing the most modern technologies in this direction for several years, so our plant was invited to become such a partner,” the founder of the enterprise, Yevhen Simchenko, is quoted in the message.
As the plant’s press service told Interfax-Ukraine, the main advantages that allowed Liebherr to make a choice in favor of the enterprise were the experience in modernizing diesel locomotives in Ukraine and the availability of highly qualified workers.
“Mykolaiv Locomotive Repair Plant has modernized more than 40 diesel locomotives with the installation of various diesel engines, such as Cummins, ABC and Caterpillar. Also, a great role was played by the fact that we have our own design bureau, which develops all modernization projects,” the press service said.
According to it, the share of modernization of locomotives in the company’s total turnover is gradually increasing, and this year it is about 70%.
“In Ukraine, only industrial enterprises [ArcelorMittal Kryvyi Rih, Ferrexpo, Metinvest] modernize the locomotive fleet. Ukrzaliznytsia has not yet decided whether it will follow the path of modernization, the effectiveness of which is shown by world practice, or will ‘reinvent the wheel,'” the press service said.
At the same time, the company stressed, modernization is becoming more and more important given the aging of equipment, and intensive wear of the main components that need to be replaced.
“Since most of the locomotives were designed and built back in the USSR, now they are morally and technically outdated. In addition, the main components are of Russian origin. Therefore, we believe that today in Ukrainian realities the only correct and effective option is modernization of locomotives with the installation of modern systems and components, which are used all over the world,” the plant notes.
The agreement with Liebherr also provides for co-financing of projects in Ukraine, however, the company does not disclose details, citing confidentiality.
Mykolaiv Locomotive Repair Plant, established in 2010, specializes in maintenance, current and overhaul of diesel locomotives, as well as traction units (industrial electric locomotives).
Established in 1949, the family-owned company Liebherr currently has 13 production areas (including refrigeration and freezing technology, construction, mining, transshipment equipment, port equipment and wind energy). It includes more than 140 enterprises all over the world and employs about 48,000 people.