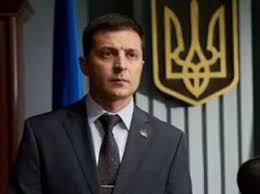 Russian President Vladimir Putin said he does not rule out the possibility of a meeting and talks with Ukrainian President-elect Volodymyr Zelensky.
“If we meet someday, begin some talks, and I’m not ruling this out, then we must talk how to end the conflict in southeastern Ukraine in the first place,” Putin said at press conference following his visit to China.
“Unfortunately, Mr. Zelensky has already made a statement before the election that he, firstly, is not going to sign a decree on a bill on amnesty and, secondly, [is not going] to grant special status to those territories [certain areas of Donetsk and Luhansk regions of Ukraine],” Putin said.
“Both are the key elements of the content of the Minsk Agreements and how can the issue of the LPR and the DPR be resolved without implementing the Minsk Agreements?” the Russian president said.
“I would gladly ask him these question, discuss these matters with him,” Putin said.
Mentioning that the majority of Ukrainian citizens voted for Zelensky, the Russian president expressed the opinion that “first and foremost, the people expect the future Ukrainian political leadership to resolve these issues.”
“Everyone is fed up with this conflict, everyone is tired of it, and everyone expects this from the new political leadership, including the future president,” Putin said.
“But if from the very threshold, from the start the future president says he is not going to implement the Minsk Agreements, how will he resolve this issue then? I would be glad to discuss that with him, I would like to understand his stance,” the Russian president said.