GERMAN CHANCELLOR SCHOLZ: RUSSIA WILL REMAIN UNDER SANCTIONS IF THERE IS NO PEACE AGREEMENT ON UKRAINE 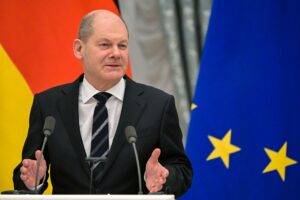 Peace, not secured by an appropriate agreement, will not free Russia from international sanctions, said German Chancellor Olaf Scholz.
“Russia is in a very difficult situation, the sanctions are causing serious damage to the Russian economy,” Scholz said in an interview with Spiegel.
A “cold peace” that is not secured by an agreement will not free Russia from sanctions,” the chancellor added.

GERMAN CHANCELLOR SCHOLZ: GERMANY IS STUDYING LIST OF WEAPONS REQUESTED BY UKRAINE TO FIND OUT WHAT CAN BE DELIVERED QUICKLY 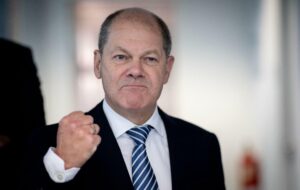 German Chancellor Olaf Scholz said that Germany is studying the list of weapons requested by Ukraine and plans to “find out what can be supplied quickly.”
“The lists include anti-tank weapons and air defense weapons,” Scholz told reporters in Berlin on Tuesday following a video conference with US President Joe Biden and other G7 leaders.
According to him, weapons that the Ukrainian army already knows how to use should be supplied. At the same time, the chancellor stressed that the possibilities of the FRG to supply arms were “almost exhausted.”
Scholz also said that NATO would not interfere in the conflict in Ukraine.
“NATO will not interfere in the conflict,” he said.
In turn, British Prime Minister Boris Johnson said, speaking in the House of Commons, that “NATO’s long-term goal should be to strengthen and strengthen Ukraine to such a level that Russia will never dare to invade again.”
At the same time, the President of the European Council, Charles Michel, following a video conference, said that the EU will create a special Ukraine Solidarity Fund, which will be used to support and restore Ukraine.
“We discussed with US President Joe Biden and like-minded partners a further coordinated response to Russia’s aggression against Ukraine. We discussed the need for further humanitarian, financial and military assistance. The EU will create a Solidarity Fund with Ukraine to immediately support and restore democratic Ukraine,” wrote the President of the European Council Charles Michel on Twitter. 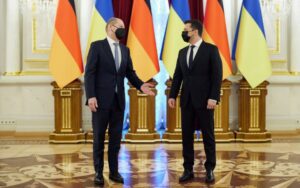 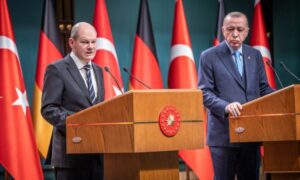 Turkish President Recep Tayyip Erdogan and German Chancellor Olaf Scholz discussed bilateral relations between the countries and Russia’s military aggression in Ukraine in a telephone conversation, the Anadolu agency reported on Monday.
“The Turkish President, in a conversation with the German Chancellor, noted the importance of strengthening relations between Turkey and Germany, supporting close cooperation at all levels,” the agency reports.
Erdogan also stressed Turkey’s efforts to de-escalate the situation in Ukraine due to the war unleashed by Russia. The President of Turkey has repeatedly taken the initiative to organize negotiations between Russian President Vladimir Putin and Ukrainian President Vladimir Zelensky on Turkish territory, and also noted that Turkey will be ready in the future to act as one of the guarantors of Ukraine’s security, but this issue needs to be studied in more detail. 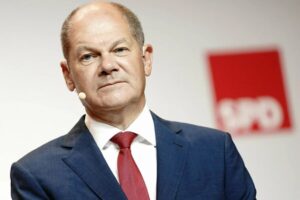 German Chancellor Olaf Scholz promised that EU countries would impose new sanctions on Russia.
“In the coming days, we will take new measures,” he said on Sunday in Berlin.
According to him, the Russian president and those who support him will “feel the consequences” of these sanctions. 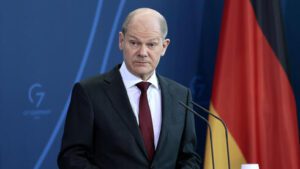 All federal states of Germany will provide quick assistance to Ukrainians who are fleeing the war, and its procedure will be simple, Chancellor Olaf Scholz said.
“Overcoming this challenge is the common task of our entire state,” he tweeted on Wednesday evening.
Scholz thanked the many volunteers whose “tireless efforts allow us to help people fleeing the terrible war in Ukraine.”
The German chancellor also said that it is completely unacceptable when immigrants from Russia are insulted or even subjected to physical attack.
“Because this is Putin’s war. He, and only he, is responsible for this,” Scholz stressed.