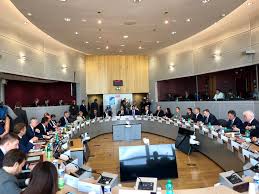 Vice-President for Energy Union Maroš Šefčovič has said that it was managed to establish positive, constructive working atmosphere during the EU-Ukraine-Russia trilateral gas talks in Brussels between the Russian and Ukraine economy ministers. “We have agreed that there will be an inter-ministerial consultation with the two companies [NY and Russia’s Gazprom] participating to hammer out the remaining interlinked issues. We would resume our meeting at political level by the end of October when, I hope, we will have more progress achieved on the remaining issues,” he said at a press conference in Brussels after the third round of the trilateral gas talks on Thursday.
According to him, it is necessary that the case be organized with a good chronology, and it is necessary that the Ukrainians do a good job of transmitting European rules and unbundling of the gas transportation system.
The EU also explained to the Russian side that, from a legal point of view, the extension of the current contract will not be possible, because there will be other counterparties, and Naftogaz will no longer exist from January 1. The current contract does not comply with the rules of the EU, he said. New solutions should be found, Šefčovič said.
He said that the duration of a future contract is important for investment into the Ukrainian transit system.
“To conclude, there was good atmosphere and constructive spirit today that, I believe, creates a necessary precondition for the next round of trilateral gas talks and for having everything settled before the end of this year,” he said.