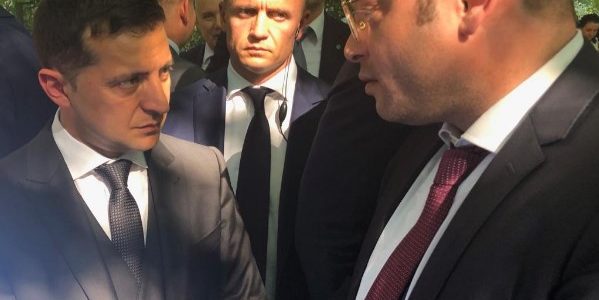 The President of Ukraine was informed of an extremely unpleasant incident in Uman, the Hasidic pilgrimage center, in which the city authorities were involved.
This was stated by the founder and head of the Orthodox Jewish Chamber of Commerce (New York), Duvi Honig.
“The Chamber of Commerce of Orthodox Jews sent a delegation here to call on President Zelensky to stop corruption in Uman, where land is being taken away from Jews. The local mayor and his deputy are demanding huge bribes in exchange for permission to build a memorial complex that includes a twenty-thousand-seat synagogue to accommodate everyone who comes to the city to meet Rosh Hashanah (Jewish New Year – Ed.) They demand 300 thousand dollars into their own pockets. We have all the documents, but they want to change the zoning and make a park on the land unless they receive these dollars. Today we met with President Zelensky after we had passed this information onto him two days ago, and the president said that he would personally deal with this matter. We are now sending him all the documents, but he has already sent a delegation from the President’s Office to Uman to deal with the situation on the spot, and this has already been done,” he said.
“We thank President Zelensky for his quick response and leadership. We were pleased to meet with him and we will help the people of Ukraine, the people of Kyiv and Uman, become a modern nation, rather than a third world country. People who come to Uman from the United States, Canada, Israel, Europe should live in normal conditions, have a normal spiritual center, because currently there is no proper infrastructure. And, of course, the mayor and his deputy must leave their posts. They must understand that it is impossible to blackmail and sabotage and use own society as a piggy bank,” Duvi Honig said.
Recall that for more than 10 years the Jewish religious community of Bratslav Hasidim has been fighting for the right to build a Jewish memorial complex in Uman – one of the largest Jewish spiritual centers in Ukraine.
The head of the orthodox Jewish Chamber of Commerce is Mr. Duvi Honig.