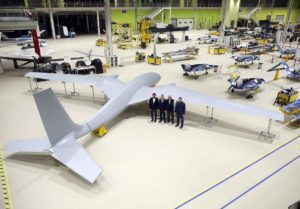 Ukrspecexport, part of the Ukroboronprom State Concern, and the Turkish company Baykar Defense are developing a next generation unmanned aerial vehicle Akinci.
“The new generation strike UAV Akinci is being developed in accordance with the requirements of armed conflicts of the 21st century and is intended primarily for both Turkish and Ukrainian armed forces. One of its main advantages is the ability to deliver high-precision strikes with the same weapons that are used on conventional airplanes. We are talking about heavy-duty ammunition weighing hundreds of kilograms,” Ukroboronprom’s press service said.
According to the state concern, this has become possible thanks to the use of Ukrainian engines, which provide greater carrying capacity, speed and flight altitude, economy and ease of operation.
Akinci refers to the new “heavy” class of drones. It is equipped with two Ukrainian-made engines that provide flight at an altitude of more than 12 km. The drone has a wingspan of 20 meters, is capable of lifting more than 1,000 kg of weapons into the air and being in flight for a day.
The drone is equipped with the most advanced surveillance systems from thermal imagers and powerful cameras to radars with an active phased antenna array and numerous sensors.
“All this allows us to reveal even well-camouflaged targets at a considerable distance, to transmit coordinates for destruction, or to independently launch high-precision strikes,” Ukroboronprom said.
Akinci’s weapons range includes guided missiles and various conventional and high-precision bombs. Such armament allows the drone to destroy enemy manpower and equipment, as well as to strike at important enemy targets – fortifications, command and communications centers, bridges, warehouses, etc.
As reported, in 2019 the state-owned company Ukrspecexport and the Turkish Baykar Defence, which is one of the leading manufacturers of drones, created a joint venture that specializes in high-precision weapons and aerospace technologies. The main task of the joint venture is to combine the capacities of the defense complexes of the two countries for the mass production of new models of modern weapons for their own armies. This will allow moving away from classic arms sales and purchase contracts to a fundamentally new level of cooperation. The cooperation will exploit synergies of defense technologies and a combination of advanced developments in Turkey and Ukraine.