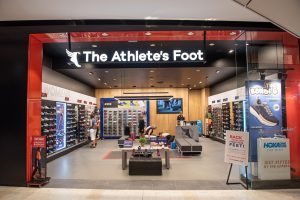 The first store of the fashion brand The Athlete’s Foot, which is being developed in Ukraine by the Epicenter K group of companies under a franchise, was opened on December 26 in the shopping and entertainment center Blockbuster Mall in Kyiv.
“The Athlete’s Foot (TAF) is a subsidiary project of Intersport International Corporation. In Ukraine, its development as a franchise will be carried out by the Epicenter K group of companies, which this year has entered into an agreement with the owner of the brand … Ukraine became one of 30 countries of the world where this brand operates,” a press release from Epicenter K reads.
According to the report, the area of the store is 340 sq m.
TAF stores are also to open in other cities with a population of one million, in particular in Dnipro and Odesa, but the dates have not been named due to the coronavirus pandemic.
Epicenter K LLC was founded in 2003 and opened the first hypermarket in Kyiv in December of the same year. As of August 2020, the chain has 62 shopping centers in Ukraine.