The EU Council obliged the Belarusian cargo carriers to withdraw all transport from the territory of the European Union by April 16 this year, this follows from the decision of the EU Council, published in the official journal of the European Union.
“In view of the gravity of the situation… it is appropriate to ban any road transport company established in Belarus from transporting goods by road across the territory of the Union, including in transit. Further action by the Union is required to implement this measure,” the document says.
The decision states that the ban, which came into force on April 8, for any road transport enterprises established in Belarus to transport goods by road across the EU, including in transit, “does not apply until April 16, 2022 for the transport of goods that began before April 9 April 2022, provided that the vehicle was already on the territory of the Union on April 9, 2022 or is in transit through the Union to return to Belarus.”
It is also reported that the ban does not apply to enterprises transporting mail, as well as to the supply of natural gas and oil to the EU, including refined products, as well as titanium, aluminum, copper, nickel, palladium and iron ore; pharmaceutical, medical, agricultural and food products, including wheat and fertilizers; goods for humanitarian purposes, as well as transport of diplomatic and consular representations of the EU and Member States in Belarus, including delegations, embassies and missions, or international organizations in Belarus, enjoying immunities in accordance with international law.
The decision came into force on April 9. 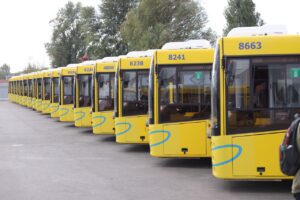 The Interdepartmental Commission on International Trade (ICMT) of Ukraine established the facts of discriminatory and unfriendly actions on the part of Belarus against Ukrainian automotive enterprises and applied adequate measures, deciding to introduce a special duty on the import of buses, trucks and special vehicles from Belarus in the amount of 35% of customs value.
“The special duty is applied… until the fact of the cessation of discriminatory and unfriendly actions against Ukraine by the Republic of Belarus is established,” the Commission said in a statement in the Uriadovy Kurier newspaper on Thursday.
According to it, the decision of the ICMT on the introduction of the special duty comes into force 10 days from the date of publication.
According to the report, based on the results of consideration of materials submitted by the Ministry for Development of Economy, Trade and Agriculture of Ukraine, it was established that the government of Belarus has created artificial barriers in relation to wheeled vehicles imported from Ukraine in the form of a recycling fee and unequal conditions for participation in public procurement, as a result of which it becomes more complicated to enter the Belarusian market for Ukrainian enterprises.
“Such actions of the Republic of Belarus contradict the Articles of the Agreement on the Free Trade Area (CIS) dated October 18, 2011, the Articles of the Agreement between the Government of Ukraine and the Government of the Republic of Belarus on Free Trade dated December 17, 1992 and are considered discriminatory and unfriendly,” the ICMT said in the statement.
The special duty is imposed on the import of new buses to Ukraine classified according to codes of the Ukrainian Classifier of Goods for Foreign Economic Activity 8702 10 11 10, 8702 10 11 30, 8702 10 91 00, 8702 20 10 10, 8702 20 10 90, 8702 20 90 00, 8702 30 10 00, 8702 30 90 00, 8702 40 00 10, 8702 40 00 90, 8702 90 11 00, 8702 90 31 00, 8702 90 90 00.
With regard to trucks, the duty is introduced on new diesel and semi-diesel vehicles with a gross weight of more than 5 tonnes, but no more than 20 tonnes, and a total weight of more than 20 tonnes (except for chassis with a cab), classified according to codes 8704 22 91 00 and 8704 23 91.
Also, the 35% special duty will be imposed on the import of some special vehicles: trucks for emergency repairs, truck cranes, road sweepers, watering machines, workshop vehicles, hydraulic lifts classified according to codes 8705 10 00 00 and 8705 90 80 90.
According to the State Customs Service, in 2020, under general code 8702 (motor vehicles for transporting more than 10 people, including a driver), buses worth $38 million (60% of total imports) were imported to Ukraine from Belarus, with no exports at all.
Trucks with a gross weight of 5-20 tonnes from Belarus were imported for $10.4 million, over 20 tonnes – for $34.13 million (there was no export), special vehicles under classifier code 8705 10 00 00 – for $4 million (there was no export from Ukraine), under code 8705 90 80 90 – for $5.76 million (exported for $0.05 million).
As reported, the Ministry of Economy launched an investigation into the facts of discriminatory actions on the part of the Republic of Belarus regarding the legal rights and interests of Ukrainian automotive enterprises at the request of the Ukrautoprom association. 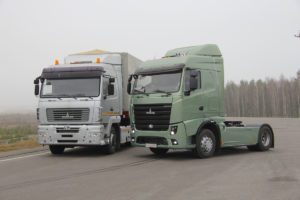 Zaporizhia Automobile Plant (ZAZ), which is part of UkrAVTO Corporation, being under reorganization, could in 2019 launch assembling MAZ trucks within joint production with Minsk Automobile Plant (Belarus).
UkrAVTO Press Secretary Dmytro Skliarenko told Interfax-Ukraine the parties are currently negotiating. If agreed, the first stage of the project will include assembling imported vehicle sets.
“At the same time, the possibility of localizing this production should be noted – the Belarusian side does not object to the use of components of Ukrainian production in the assembly. For the Ukrainian partners of ZAZ this means receiving additional distribution channels for the products and, as a result, developing domestic production related to the automotive industry sectors,” Skliarenko said.
He explained that taking into account the current Ukrainian realities, when amidst a serious reduction of the market of new vehicles the state actually opened the doors to European “second hand” and the only auto company in Ukraine with a full production cycle was forced to stop production of passenger cars and mothball technological lines, ZAZ is seeking the ways to replace the lost volumes by mastering the producing other types of vehicles.