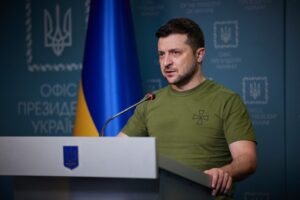 The main topics in the contacts of Ukrainian President Volodymyr Zelensky with the leaders of other countries remain defense and financial support of the state, blocking of Ukrainian ports in the Black Sea, the threat of a food crisis, Presidential Press Secretary Sergei Nikiforov said.
“The list of issues is the same. There is an urgent issue – blocking our ports in the Black Sea. There is a threat of a general food crisis and a food crisis in certain regions of different countries, because Ukraine is a supplier of agricultural products for many markets. And now because of violations of supply chains and supply chains, such a threat exists,” Nikiforov said on the air of the national telethon on Sunday.
Also, according to him, topical issues are financial support for the Ukrainian economy in the conditions of war, sanctions against the Russian Federation and defense support.
“With some of the leaders, certain issues come to the fore, with others – in the background. It depends on the country and each specific situation,” he said.