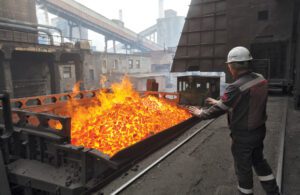 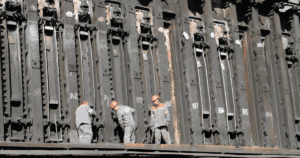 PrJSC Dniprovsky Metallurgical Plant (DMZ, formerly Evraz-DMZ), a member of DCH Steel of the DCH group of businessman Oleksandr Yaroslavsky, has completed the first stage of overhaul of coke oven battery No. 4, which will reduce emissions of air pollutants.
According to the company’s press release on Thursday, the total investment is about UAH 170 million.
As part of the investment project, 20 coking chambers were repaired at the DMZ coke-chemical site. Repaired furnaces do not lose coke oven gas – all of it goes for treatment. Due to the sealing of the refractory masonry, the elimination of leaks into the heating system from the coking chambers and more complete combustion of gas in verticals, emissions of pollutants will decrease.
The press service also said that the excess of coke oven gas, which may be formed during the commissioning period, will be sent to the afterburner, the work of which is fully consistent with the technological process. The repair of the rest of the coking chambers will continue at the operating battery, and it is planned to complete it by the end of the year.
“DMZ is systematically engaged in the modernization of fixed assets at the coke-chemical site. In addition to the overhaul of coke oven battery No. 4, this year, ceramic surfacing is being carried out at coke oven battery No. 1 and coke oven battery No. 2 with sealing of heating walls. In general, this will increase the efficiency of the furnaces and significantly reduce the burden on the environment,” Director General of the DMZ Vitaliy Bash said.
At the same time, it is recalled that since 2016, DMZ has invested UAH 475 million in environmental programs. During this time, the company has reduced air emissions by almost 25%. Now the enterprise has an investment program in the amount of $400 million, aimed at modernizing production facilities and reducing the burden on the environment.
DMZ specializes in the production of steel, cast iron, rolled products and products from them. 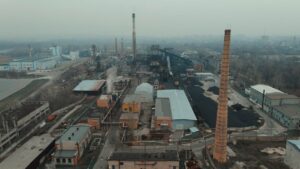 Ukrainian coke plants in January-July of this year increased the production of metallurgical coke with a 6% moisture content by 2% compared to the same period last year, to 5.749 million tonnes.
The Ukrkoks association of coke and chemical enterprises (Dnipro) told Interfax-Ukraine that in July 826,000 tonnes of coke were produced.
The director general of Ukrkoks, Anatoliy Starovoit, told Interfax-Ukraine that the enterprises continue to work at the request of metallurgical plants, satisfying them with coke in full, taking into account imports.
According to him, coke chemical plants are provided with coking coal for production programs.
According to Ukrkoks, in 2020 coke plants reduced the production of metallurgical coke with a 6% moisture content by 3.9% compared to 2019, to 9.66 million tonnes. The enterprises were supplied with 27.2% of domestic coal and concentrate and 72.8% of imports. In general, 3.618 million tonnes of raw coal and concentrate of domestic production were supplied to the coke plants over the year, some 9.675 million tonnes were imported. In general, 13.293 million tonnes of coal were supplied to the plants, including 5.202 million tonnes imported from the Russian Federation, 3.523 million tonnes from the United States and Canada, 873,300 tonnes from Kazakhstan, and 76,000 tonnes from Poland. 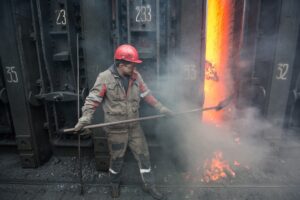 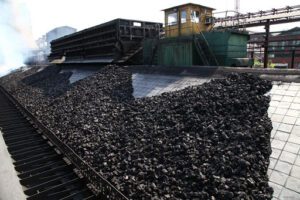 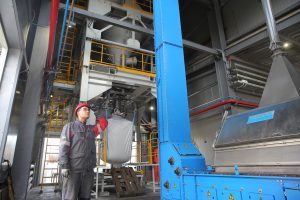 PrJSC Zaporizhkoks, one of the largest producers of coke and chemical products in Ukraine, part of the Metinvest Group, has completed the next stage of modernization of coke oven batteries No. 5 and 6 within the framework of the program for upgrading production capacities.
According to the company’s press release on Friday, investments amounted to about UAH 139 million.
At the same time, it is specified that according to the program of modernization and reconstruction of coke production, in 2020 at coke oven batteries No. 5 and 6, some 26 walls of coking chambers were repaired, reinforcement elements, armor and anchor columns on the furnaces were replaced. On the machine and coke side of the oven batteries, the vertical channels and new doors were installed on the coking chambers. The gas inlet and outlet fittings were repaired.
In order to ensure the safety of the work at coke oven battery No. 5, the end platform was overhauled, metal structures, concrete floors were replaced, new stairways and fences were installed.
“Despite the coronavirus [COVID-19] crisis, Zaporizhkoks continues to systematically fulfill its obligations to modernize production facilities and systematically reduce the burden on the environment. The overhaul of coke oven batteries allowed us not only to maintain, but also to increase coke production in 2020, without exceeding environmental standards,” Director General of Zaporizhkoks Oleksandr Tretiakov said.
During the overhaul, production was not stopped, which made it possible to maintain a stable output of coke, in 2020 the enterprise produced 853,120 tonnes of blast furnace coke, which is 3% higher than in 2019.
The press service said that the program for the reconstruction of coke oven batteries No. 5 and 6 is one of the main strategic projects of the investment program of Zaporizhkoks. The overhaul with a total budget of UAH 250 million started in 2016. It is planned to complete it in stages, without suspending the production, until 2022.
As reported, Zaporizhkoks in 2019 increased its production by 0.3% compared to the previous year, to 827,500 tonnes.
Zaporizhkoks produces about 10% of coke produced in Ukraine, owns a full technological cycle of processing coke chemical products. In addition, it produces coke oven gas and pitch coke.
Metinvest is a vertically integrated group of mining companies. Its main shareholders are SCM Group (71.24%) and Smart-Holding (23.76%), jointly managing the company.
Metinvest Holding LLC is the managing company of Metinvest Group.