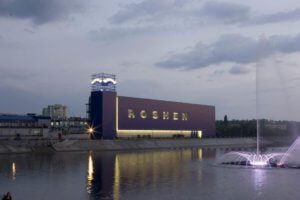 Roshen Corporation will allocate UAH 160.4 million for the second stage of reconstruction of Kyiv Confectionary Factory Roshen, PrJSC Kyiv Confectionery Factory Roshen said in the information disclosure system of the National Commission on Securities and the Stock Market. According to the company, the funds will be used for landscaping the territory with the arrangement of a fountain in the territory of the confectionery factory at 1 Nauky Avenue in Holosiyivsky district of the capital. The general contractor of the work is European Construction Technologies LLC.
As reported, Roshen in 2018 announced the investment of UAH 90 million in the creation of a public space in the territory of the factory. The provisional name of the reconstruction project is Roshen Plaza.
According to the company, the factory does not cease to exist, but its capacity is reduced. Part of the production premises will remain in the factory’s territory, the company’s office and public facilities will be located in one of the buildings.
Roshen Corporation is one of the top 30 largest confectionery manufacturers in the world.
The Roshen network in Ukraine includes 50 stores in five regions of Ukraine. The first one opened in Kyiv in 2009. The corporation annually opens five or six stores.