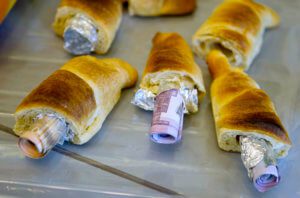 Prime Minister of Ukraine Volodymyr Groysman has called on the leaders of foreign diplomatic institutions of Ukraine to contribute to the fight against smuggling. “Prime Minister of Ukraine Volodymyr Groysman has urged the heads of diplomatic institutions of Ukraine abroad to join the campaign announced by the government dubbed “Ukraine without smuggling” by prompt response to cases of illegal actions and by providing information on the movement of goods taking into account their present price,” the press service of the Cabinet of Ministers said on the results of the meeting of the premier with heads of foreign diplomatic institutions in Kyiv on Tuesday.
Groysman, in particular, asked the diplomats to respond to the requests of the State Fiscal Service, customs office, law enforcement system and facilitate the rapid receipt of information from international partners.