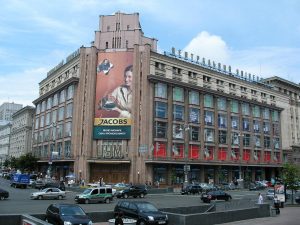 The main shareholder of PrJSC Ukraina Department Store, the manager of the shopping and entertainment center of the same name located at 3 Svobody Square in Kyiv, the Swedish company Quinn Holdings Sweden AB, has built up a 98.3% stake in the company and became the owner of a controlling stake.
According to the statement in the information disclosure system of the National Securities and Stock Market Commission, the relevant letter was received on May 19.
Thus, Quinn Holdings Sweden AB, together with affiliates, is the owner of 122,985,402 ordinary registered shares of the company, which is 98.372% of the total number of its shares. The ultimate beneficiary is Irish Bank Resolution Corporation (IBRC), Ireland’s state-owned bank.
According to the National Securities and Stock Market Commission, the net income of PrJSC Ukraina Department Store increased by 8.2% in 2017 compared to 2016, to UAH 155.7 million, while its net loss amounted to UAH 273.3 million against UAH 67.8 million of net income.