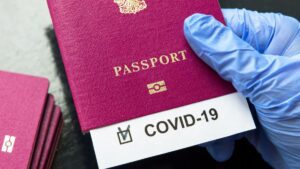 The EU digital certificate of vaccination or a past COVID-19 disease must be extended until June 2023, European deputies came to this conclusion at a session of the European Parliament (EP) on Thursday in Strasbourg.
The EP supported the respective decision of the committee on civil liberties, justice and home affairs and approved by an overwhelming majority a proposal to negotiate with EU member states (EU Council) for a one-year extension of the certificate, which will expire on 30 June.
In order to respect the freedom of movement in the EU, MEPs clarified the proposals put forward to renew this certificate, emphasizing that Member States should not impose additional restrictions on the movement of citizens holding such a digital European certificate, except in cases of absolute necessity.
“If such restrictions are necessary, they should be limited, proportionate and based on the latest scientific assessments of the European Center for Disease Prevention and Control and the EU Committee for Sanitary Safety,” the EP notes.
At the end of April, European Commission (EC) spokesman Christian Wiegand said that the EU digital certificate was a success and the EC is proposing to extend it for another year.
“The certificate will expire at the end of June. We proposed a one-year extension for the simple reason that we do not know how the epidemiological situation will develop in the coming months, in particular in the fall. We have already seen that new strains may appear,” the press officer said. secretary.
“And in any case, you should always be on the lookout and have this very useful tool that is still being used in some countries,” Wiegand explained, answering the question, what is the future of the certificate, given that some EU states no longer use it.