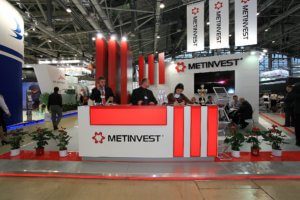 Metinvest Group has officially announced it has bought up to 24.99% stake in Donetsksteel’s coking coal producers for about $190 million. “The Group has secured additional long-term supply of high-grade coking coal by investing in production cooperation and acquiring up to 24.99% of some coking coal assets in Ukraine,” it said in a statement on the Irish Stock Exchange on August 16. “The assets include several extraction, enrichment and sale entities, the most significant of which is Pokrovske Colliery and Svyato-Varvarinskaya Enrichment Plant, which together form the largest coking coal extraction and production business in Ukraine [until recently, they were part of the industrial and financial group Donetskstal, also known as Donetsksteel],” the statement said.
They are located on the border of Dnipropetrovsk and Donetsk regions, close to Metinvest enterprises. The assets are registered in accordance with Ukrainian law and none is located in the non-controlled territories of Ukraine.
According to Metinvest, the acquisition is in line with the Group’s strategic priority of improving its self-sufficiency in coking coal to strengthen its vertical integration.
As of December 31, 2017, the long-life proven and probable coal reserves amounted to 81 million tonnes, as calculated according to JORC methodology as at January 1, 2013, and adjusted for production in 2013-17. In 2017, raw coal extraction was 4.3 million tonnes, while coking coal concentrate production was 2.6 million tonnes.
Metinvest says sale products mostly consist of high-quality K-grade coal (hard coking coal, most of whose quality characteristics are in line with the Platts requirements for the Premium Low Vol HCC benchmark), which is used in coke production.
The Metinvest Group is a vertically integrated group of steel and mining companies in Donetsk, Luhansk, and Dnipropetrovsk region. Its major stockholders are SCM with 71.24% and Smart-Holding with 23.76%, which jointly manage the group.