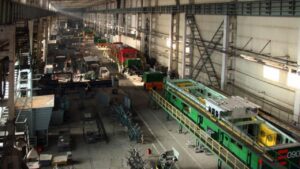 The Cabinet of Ministers of Ukraine has transferred Dnipro Electric Locomotive Plant to the list of objects of big privatization from objects of small privatization, which means sale at a tender with conditions.
The corresponding order on the plan to sell 100% of the plant shares was adopted by the government at a meeting on September 15.
An explanatory note to the draft resolution states that the value of the company’s assets at the end of 2020 was UAH 420.3 million, while small privatization objects have assets of up to UAH 250 million.
The plant in 2018-2019 was included in the list of objects of small privatization, but the sale did not take place. In August 2020, the government agreed on the transformation of the state enterprise Dnipro Electric Locomotive Plant into a joint-stock company, and the corresponding changes were registered in March 2021.
Dnipro Electric Locomotive Plant specializes in the production of main-line electric locomotives of direct and alternating current, industrial electric locomotives for opencast mining of minerals, as well as mine contact electric locomotives for mining and coal industries.
According to information in the SPARK system, the plant’s net loss in 2020 increased by 18.8% – to UAH 78.5 million, and revenue fell to UAH 4,000 from UAH 35.6 million a year earlier.