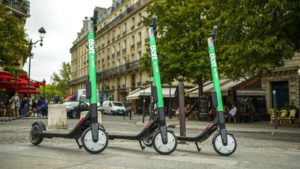 The Bolt taxi ride service (earlier Taxify) is launching the electric scooter ride service in Ukraine and by spring 2020 the service will be available in the text mode in the UNIT.City innovation park, Bolt Country Manager Taras Potichny said during the presentation of the new service in Kyiv on Thursday.
“We are the first in Ukraine to launch a service that is popular in many cities around the world. I am glad that we are changing the market, changing the look of the city, making it even more modern. Electric scooters really solve many problems. It often happens that moving around the city center by car is quite difficult, but driving a few kilometers on an electric scooter is easy, fast and brings pleasure,” Potichny said.
The cost of using electric scooters in Kyiv will be published after the full official launch of the project.
“The price has not yet been formed. In Eastern Europe, it amounts to 60-70% of the average check for the cost of a taxi. In Kyiv, it is UAH 100-110. Accordingly, the average trip on a scooter will cost UAH 60-70. The price will be formed from the opposite: EUR 1 usually costs the scooter unlocking itself, and one minute – UAH 1-2. This is the framework in which we will determine the price,” the country manager said.
At the same time, he added that for the test period the price will be significantly reduced, then it will be regulated depending on the demand of the service.
The Bolt fleet has Segway NineBolt ES4 electric scooters with a maximum speed of 25 km per hour and a range of 45 km.
To start using the service, you need to find a scooter, unlock it using the QR code in the application, get to your destination and leave it in any convenient and safe place. The service can only be used by persons 18 years or above: when registering an account, the user will have to indicate the date of birth.
“The rent price for an electric scooter will include the unlock price and the price per minute of use. For cases where it is planned to travel a lot and payment per minute is unprofitable for the client, Bolt will set the price for renting a scooter for the whole day. No matter how long you drive around the city, your card will not be charged more than the set price,” the company said.
Places where you can rent a scooter will be located in the city center, usually near transport hubs and the most visited points. You can see where the nearest scooter locations are in the same application as for ordering a car.
It is planned that in the evenings, Bolt employees will collect scooters around the city and put them on charge so that the next morning they can be found in familiar locations.
“We are proud that the first electric scooter rental point in Ukraine appeared in UNIT.City. This is fully consistent with our idea to build an eco-friendly city in a city,” UNIT.City CEO Dominique Piotet said.
According to Potichny, after a successful launch in Kyiv, the company plans to launch the service in other cities of Ukraine.
“We would love to expand further. There are many more tourist sites with fairly closed centers: the same Odesa or Lviv, where you cannot get around the center by car. First we test this on the streets of Kyiv and will gradually expand and develop in others cities,” he said.
Earlier Bolt launched a courier delivery service by a driver in Ukraine.
As reported, Тaxify was launched in Kyiv in 2016 under the franchise agreement. In June 2018, the company relaunched the project in Kyiv with own local team, promising to enter other large cities of Ukraine.
Early March 2019, Тaxify changed its name to Bolt.