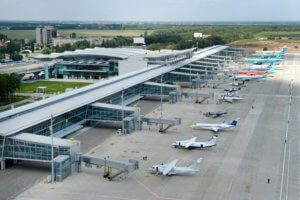 The Sikorsky Kyiv international airport intends to expand Terminal A for servicing growing passenger flow, Board Chairman Denys Kostrzhevsky has said. “In the coming years we predict growth of passenger flow and the new large-scale reconstruction being conducted by Master-Avia (the company that manages the airport) is linked to this. In 2019, the airports arrival and departure capacities would be doubled,” he said in an interview with Interfax-Ukraine. He said that at present, the international flight arrival zone has been re-equipped and expanded, and in the middle of May 2018 the large-scale reconstruction of Terminal A will start at the airport.
“Previously, the airport used Terminal D only for servicing domestic flights. Unfortunately, the domestic passenger traffic decreased significantly. IT practically came to nil. It was decided to re-equip a part of the facilities for servicing the arriving passengers from international flights. I cannot name the exact cost of reconstruction, as we are in the process. This is about UAH 20 million,” Kostrzhevsky said.
He added that two galleries have already been built that joined Terminals D and A. The number of passport control posts doubled, the area for staying passengers has been expanded significantly. The number of luggage delivery belts was doubled.
“It is planned to add more areas, about 9,000 square meters, to Terminal A, which will double the number of check-in counters, to 40. Also, the number of passport control desks, security checkpoints will be doubled, and, as a result, the number of passengers served simultaneously will grow 2.5-fold. Now it is about 700 passengers per hour, and there are plans to bring it up to 1,500,” Kostrzhevsky said.