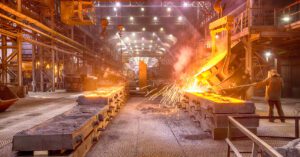 Nikopol Ferroalloy Plant (NFP, Dnipropetrovsk region) in January-May this year increased production by 12.5% compared to the same period last year, to 259,690 tonnes.
As the Ukrainian Association of Producers of Ferroalloys and Other Electrometallurgical Products told Interfax-Ukraine, in the five months, the plant increased production of silicon manganese by 9.6%, to 236,710 tonnes, and ferromanganese – by 53.9%, to 22,980 tonnes.
In May, 59,290 tonnes of ferroalloys were produced.
Nikopol Ferroalloy Plant is Ukraine’s largest ferroalloy smelter. It uses imported and domestic raw materials for the production of ferroalloys.
Nikopol plant is controlled by EastOne Group, established in autumn 2007 as a result of restructuring of Interpipe Group, and Privat Group, both based in Dnipro.