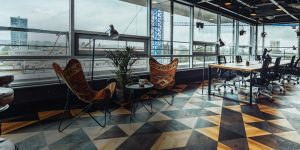 Creative States coworking space launches its own franchise in early 2021, founder of the Creative States network Ilia Kenigshtein has said. “We decided to launch our own franchise at Creative States. This is a venture project, we’ll see if it works or not, and we will make an estimate. We are launching the franchise early next year, the same Franch is preparing it for us, headed by Roman Kyrylovych, who made the franchise for Rozetka, Smartass and many other cool projects,” Kenigshtein wrote on his Facebook page.
According to him, the franchise is focused on the regions of Ukraine and beyond, except for Kyiv and Dnipro – cities where Creative States operates. At the same time, the company reserves the right to refuse cooperation if the selected location is not suitable for the network model.
Creative States plans to engage in location selection, design, construction and launch of a turnkey partner facility. In addition, the company will help partners attract tenants, including network clients.
“Our common goal with the franchisee is to ensure that the location comes out in aggregate not less than 28-30% of EBITDA in the annual range. More is better. This is good money, especially in the context of the commercial real estate segment,” added Kenigshtein.
He did not name the amount required to enter the project, specifying that it would not be the lowest, but promised to announce the conditions in the near future.
As reported, the Creative States of Arsenal co-working space in Kyiv was opened in May 2020. The object is located in the territory of the Arsenal plant at 8 Moskovska Street in Kyiv. Its total area is 4,100 square meters. The space is designed for 700 residents, includes 130 offices and 60 co-working seats.
The Creative States network also includes locations in the capital’s Senator and Gulliver business centers. It is also planned to open a co-working space in Dnipro, as well as to enter the European market.