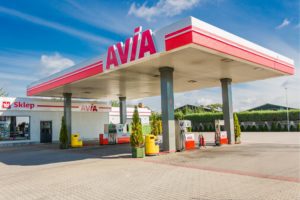 The Polish company UNIMOT and the Ukrainian company Wexler Group have opened Ukraine’s first fuel filling station under the brand of the Swiss network AVIA of AVIA Association, an Interfax-Ukraine correspondent has reported. The fuel filling station is located at 16 Kiltseva Highway in Sviatoshynsky district.
It is planned that by the end of this year 15 AVIA filling stations will be opened in Ukraine, three of them in Kyiv in Darnytsky, Obolonsky and Pechersky districts.
As reported, the Swiss international network of fuel filling stations AVIA Association represented by Polish-based UNIMOT signed a memorandum of cooperation in the fuel and energy complex of Ukraine with the supplier of light oil products Wexler Group.
Earlier UNIMOT received permission from AVIA International (Switzerland) to use the brand in Ukraine and announced the plan to open the first fuel filling stations in the country in 2019.
Wexler Group planned to significantly increase its presence in the retail market of petroleum products in Ukraine.
AVIA was established in 1927 as an association of several oil importers in Switzerland. In 1960, a number of international companies joined it, as a result AVIA International was formed. Currently it is present in Switzerland, Belgium, Bulgaria, Germany, France, Italy, the Netherlands, Austria, Poland, Portugal, Serbia, Spain, the Czech Republic, and Hungary.
UNIMOT S.A. is an energy company whose activities include imports and sale of petroleum products, liquefied natural gas, and electricity.