GAZPROM DID NOT BOOK TRANSIT THROUGH POLAND FOR MAY – ANALYSIS 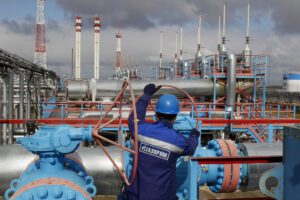 Gazprom did not choose the capacity of the Polish section of the Yamal-Europe gas pipeline during the gas transmission capacity booking session for May, according to auction data on the GSA Platform booking platform.
89 million cubic meters were offered at the auction. m per day – all these capacities were not booked.
The Yamal-Europe gas pipeline, over 2,000 km long, can pump up to 33 billion cubic meters. m per year. The Polish 683 km section is owned by the EuRoPol Gaz joint venture and operated by the national gas transmission operator Gaz-System.
Gazprom’s long-term contract for transit through this country ended two years ago. Since then, its capacity has been allocated based on auction bookings.
At present Gazprom does not use the capacities of Yamal-Europe for deliveries to Germany. The pipeline transports Russian gas to Poland. Also, through it, the republic receives small volumes of this energy resource from Germany in reverse.
The gas transmission system operator of Ukraine did not offer additional capacities for the transit of Russian gas. In previous months, a solid capacity of 15 million cubic meters was set. m per day with the entrance through the gas measuring stations (GIS) “Sudzha” and “Sokhranovka”. For several months in a row, Gazprom did not book these capacities at auctions.
The Russian concern has a long-term reservation of Ukrainian capacities in the amount of 40 billion cubic meters. m is 109 million cubic meters. m per day.

GERMANY IS LOOKING FOR BUYER FOR GAZPROM’S ASSETS – BLOOMBERG 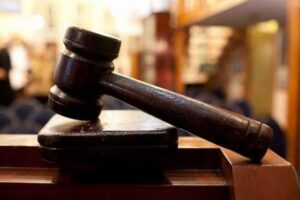 German authorities are looking for private buyers for Gazprom’s assets in the country, offering government loans from KfW IPEX-Bank as support, Bloomberg reports, citing sources familiar with the situation.

Last week, Gazprom reportedly announced that it had ceased control of the Gazprom Germania group and all of its assets. This is the WINGAS/WIEE distributor, the astora storage operator. The Gazprom Marketing & Trading group also includes the retail operator Gazprom Marketing & Trading Retail Ltd. (Gazprom Energy brand) and the global LNG trader Gazprom Global LNG. In 2019, the consolidated turnover of Gazprom Germania amounted to 24 billion euros, in 2020 – 13 billion euros.

The source of the agency also notes that Germany does not rule out the nationalization of parts of Gazprom Germania as a last resort, although Berlin wants to find another solution. Germany has made “mixed progress” in its efforts to bail out Gazprom Germania, but the government wants to avoid nationalizing or even expropriating the group’s assets, Bloomberg said. Officials are currently still studying the economic impact of a possible shutdown of Gazprom Germania’s companies. The final decision has not yet been made.

Finding a buyer for the assets will not be easy, the publication notes, as the companies’ businesses are closely linked: Gazprom Marketing & Trading is engaged in hedging and supply for Wingas and Gazprom Energy. And without these links, consumers will be forced to buy resources at much higher prices. 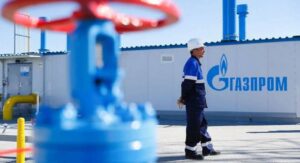 Pumping capacity via the Ukrainian gas-transit corridor has remained at yesterday’s level for European consumers.
“Gazprom is supplying Russian gas for transit via Ukraine as usual as per the bookings of European consumers at 94.6 million cubic meters on March 17,” Gazprom spokesman Sergei Kupriyanov told reporters.
According to the data of the Gas Transmission System (GTS) Operator of Ukraine, the nomination for March 17 is 95 million cubic meters, and bookings for March 16 totaled 94.5 million cubic meters.
The Yamal-Europe gas pipeline, which pumps gas through Belarus and Poland to Germany, switched to reverse mode on Tuesday and will continue pumping gas from Germany to Poland on Wednesday. Gazprom did not book any capacity along the Polish section of the pipeline either for the regular session or for the additional night session. Gas supplies from Germany to Poland, meaning off-take of additional volumes from the main European hubs, are another component of the current high prices in the EU.
Electricity generation from renewable sources is declining once again this week. The contribution of wind generation to the energy balance of Europe averaged 17% for the week of March 7 to 13; on Monday, and it has averaged 12% over the three days of this week, according to data from the WindEurope association. The weather forecast for the next few days should be calm. 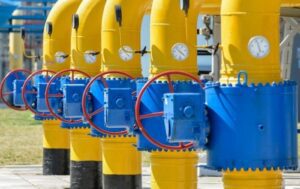 Capacity utilization of Ukraine’s transit corridor on Friday remains at the same high level, in line with the long-term contract volumes of 40 billion cubic meters per year or 109 million cubic meters per day.
European buyers have increased nominations for Gazprom’s gas after prices soared due to the imposition of sanctions on Russia. Gas prices at the TTF hub were $1,383 per thousand cubic meters on Friday morning.
“Gazprom is supplying Russian gas for transit via Ukraine as scheduled in accordance with the requests of European consumers – 109.5 mcm on March 11,” the company’s official spokesperson Sergey Kupriyanov told reporters.
As confirmed by data from the Ukrainian GTS Operator, the nomination for March 11 is 109.4 mcm, while that for March 10 was also 109.4 mcm. 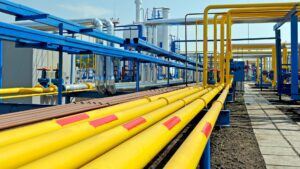 Pumping capacity via the Ukrainian gas-transit corridor has held at the previous minimum level on Thursday, and it remains 50% below the booking level under the long-term contract of 109 million cubic meters of gas per day, while the Yamal-Europe gas pipeline is still not in use.
Booking capacity of Gazprom for gas transit via Ukraine on Thursday, February 17, is 50.6 million cubic meters compared to Wednesday’s updated booking capacity of 51.6 million cubic meters, according to data of the Gas Transmission System Operator of Ukraine.
Among the gas-export pipelines, Gazprom primarily loads Nord Stream at 170 million cubic meters per day, and then loads the Ukrainian gas-transit corridor, thereby leaving the Yamal-Europe gas pipeline in a closing or balancing role. Gazprom again did not book capacity via Yamal-Europe on February 17, and direct flow along the pipeline ceased on December 21.
The presence of unclaimed gas-transit capacity in the list of transit alternatives this winter demonstrates the baselessness of the claims that the lack of Gazprom’s reserves in underground gas storage (UGS) facilities in Europe has been causing rises in prices. Reserves in underground gas storages should, if necessary, compensate for the lack of supplies via gas pipelines, though Gazprom has large transit possibilities in reserve.
It is already possible to talk in general about the heating season concluding, as winter has been rather mild in Europe this year, with the average temperature in February being two-and-a-half degrees warmer than the previous year. According to forecasts, the week of February 14 to 20 should be two-and-a-half degrees warmer than the previous week of February 7 to 13.
Electricity generation from renewable sources in Europe has been rising solidly each day this week. Wind generation contributed 17.2% to electricity generation in the week of February 7 to 13 in the region following 16% in the week of January 31 to February 6, and it rose to 28.6% on Wednesday, which was the highest figure since March 2021, according to data from the WindEurope association.
The level of gas reserves in underground storage facilities in Europe following the results of the gas day on February 15 dropped to 32.22% on Wednesday morning. This was 12.5 percentage points below the average for the past five years, according to Gas Infrastructure Europe. During the first 15 days of February, gas consumption from UGS facilities exceeded the average level over the past five years by 25%.
Gas flow from LNG terminals into the European gas-transit system in February 2022 should double compared to the level of February 2021. Average capacity utilization of regasification terminals in February is 64%.
The price of gas for Thursday delivery at the benchmark European trading platform, the Dutch TTF gas hub, is $806 per thousand cubic meters, averaging $905 per thousand cubic meters since the beginning of February. 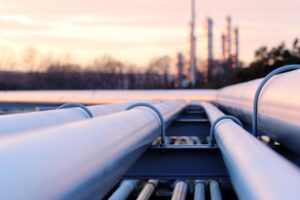 The situation on the European energy market is unable to influence the certification of the Nord Stream 2 operating company as an independent network operator, German Ambassador to Russia Geza Andreas von Geyr said in an interview with Interfax.”The conclusion of the certification process is required for the pipeline to begin commercial operations, irrespective of the situation on the European energy market. We expect Gazprom to continue to fulfil all contractual obligations towards Europe, particularly in relation to gas transit through Ukraine,” von Geyr said.As reported earlier, the German Federal Network Agency started to process the application from the Nord Stream 2 operating company as an independent operator on September 8. The processing has been suspended as Bundesnetzagentur decided that a subject of its regulation could be only a German subsidiary of the Swiss-based Nord Stream 2 AG, which should be the owner and operator of the German part of the pipeline. The Polish company PGNiG and the Ukrainian opponents of the Project, Naftogaz and Gas Transmission System Operator of Ukraine, have received access to the certification process. The application processing deadline has been moved to the middle of 2022, which means Europe cannot count on gas supply through the new pipeline in the winter season of 2021/22.”The certification process for Nord Stream 2 is being conducted by the independent German regulator, the Bundesnetzagentur, in strict accordance with the provisions of the European Gas Directive. Interested parties can raise their views within that legal framework and have their voices heard. Politically, we have made a commitment that this pipeline must not be used to exert pressure on Ukraine. That is why we are campaigning to see reliable, long-term, contractually agreed gas supplies and transit agreements for Ukraine,” von Geyr said.