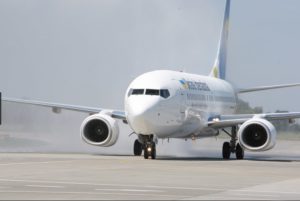 Ukraine International Airlines (UIA) has been permitted to transport dangerous goods of six categories from the Chinese aviation authority, the airline has said.
The license gives UIA the right to transport to/from China consumer goods, which are specified as “Dangerous Goods.” These are smartphones, computers, tablets, photo cameras and other electronical items of well-known world brands, which are produced in China.
“It took us over three years for receiving the license, during this time the company was subject to numerous thorough checks by the Chinese Aviation Authority. As a rule, China checks the reliability of the carriers who are going to transport the goods specified as “Dangerous Goods” very scrupulously. Now all the formalities are finalized, UIA has new opportunities for organizing the transportation of consumer goods on non-stop flights Kyiv – Beijing – Kyiv by wide-body long-haul Boeing-777 aircraft,” Peter Kukharchuk, UIA Logistics and Cargo Director, said.
He said that UIA was among the first ones to receive a license for transportation of several categories of dangerous goods, gives us significant competitive advantages.
UIA received a license for transportation of dangerous goods of categories 2, 3, 5, 6, 8 and 9 from China.