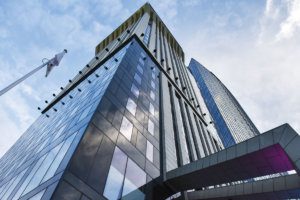 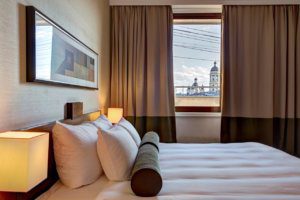 The occupancy of Kyiv hotels in the first quarter of 2018 increased by 4 percentage points compared to the same period a year earlier and amounted to 43%, the press service of Jones Lang LaSalle (JLL) consulting company in Ukraine has said. “The operational indicators of the hotel market of the Ukrainian capital are gradually recovering. Even in first quarter, which is not traditionally active, dynamics is visible: the average market occupancy in the period from January to March increased by 4 p.p. compared to the previous year, to 43%, against the backdrop of tariff growth,” the head of the JLL hotel business department, Tetiana Veller, said.
According to JLL, the average tariff for staying in the top segment hotels in January-March increased by 8% compared to the first quarter of 2017 and amounted to $160, while in the middle segment this indicator increased by 18%, to $68. At the same time, the occupancy of expensive hotels remained at the last year’s level of 40%, while occupancy at middle segment hotels rose by 3 p.p., to 50%.
According to JLL’s forecasts, in the second quarter it is worth expecting an increase in the operating indicators of the capital hotels in connection with the Champions League final, as well as other cultural and business events. Jones Lang LaSalle provides financial and comprehensive professional services in the field of real estate. The company’s turnover in 2017 was $7.9 billion. The portfolio in real estate management is 423 million square meters. The company has about 300 corporate offices in more than 80 countries around the world, uniting more than 82,000 employees. 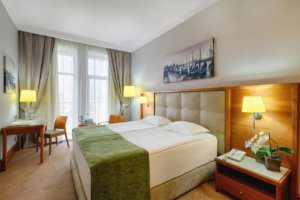 The occupancy of the most popular hotels in Kyiv for the period of the UEFA Champions League final reaches 100%, while prices exceed the usual tariffs by 5-10 times, experts polled by Interfax-Ukraine believe. “Almost all the hotels (more than 90%) have been booked for the period of the UEFA Champions League that will take place in Kyiv on May 26. Most of them have a minimum period of booking for the duration of the match, usually three or five days. The price of rooms depends on the location of the hotel. Prices for rooms in hotels in the center of the city are 5-10 times higher than the standard rate,” Natalia Chistiakova, the director of the valuation and consulting department at Colliers International (Ukraine), said.
According to her, the most popular objects are three-, four- and five-star hotels in the central part of the city. Tariffs for rooms decrease with distance from the Olympiysky sports complex.
In particular, according to Park Inn by Radisson Kyiv Troyitska hotel, located near the sports complex, all the rooms in the object have already been booked. At the same time, the hotel offers guests the option of including in the waiting list and after May 4 receive an answer whether there are any vacant rooms. “Given the mistakes of the previous years when carrying out the events of this level, hoteliers, more often, book rooms on a prepayment of not less than 70%,” the expert said.