ABOUT 4,000 HOUSES FLOODED IN WESTERN UKRAINE 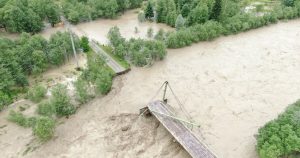 A total of 3,871 houses in 180 residential locations were flooded due to bad weather conditions in western Ukraine, cellars and household plots are still covered with water, roads, bridges and other infrastructure facilities were destroyed, eight residential locations in Prykarpattia are blacked out, the State Emergency Service of Ukraine has said. “The operations to clean-up the aftermath of rainfall floods continue in the territory of western regions (Ivano-Frankivsk, Chernivtsi, Lviv and Ternopil regions)… Three people were killed in the territory of Ivano-Frankivsk region,” it said on Saturday morning.
In the past 24 hours, the State Emergency Service rescued 46 people, evacuated three people and helped 183 people to cross the flooded areas, pumped 39,622 cubic meters of water, delivered 1,790 kilograms of food and 9,140 liters of drinking water to the local residents.
A total of 1,877 people and 455 units of equipment, including 613 employees of the State Emergency Service and 226 units of equipment (including two helicopters), were involved in the flood clean-up operations, the service said.