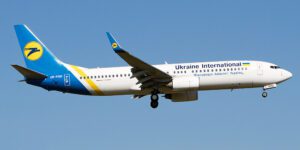 Ukraine International Airlines (UIA, Kyiv) plans to restore the hub model in 2022, return wide-body aircraft to its fleet, and launch long-haul flights.
“We expect an improvement in the situation in the aviation market and are preparing to restore our network model. At the same time, we want to adopt a new operating model of a three-wave hub, we want to return wide-body aircraft to the airline’s fleet and we want to restore long-haul flights. All these plans have been approved by the supervisory board, so the company headed by me is preparing to implement them,” CEO of UIA Yevhen Dykhne said in an interview with Interfax-Ukraine.
He also said that the UIA hub model will be developed in collaboration with Windrose on domestic flights throughout the country.
At the same time, according to Dykhne, UIA has no plans to become a low-cost airline.
“We are working to ensure that all issues related to cost reduction, which are so well and efficiently implemented in low-cost companies, become elements of our operational activities as much as possible, so as not to get negative feedback from our passenger, because there is a limit to savings which we, as a conventional company, cannot pass over,” he said.
Dykhne also announced UIA plans to return three long-haul Boeing 777 aircraft to the fleet.
“We have budgeted for the return of our three Boeing 777 aircraft. We flew these planes very comfortably and plan to return them to the fleet… including charter flights. But in any case, we plan to focus more on our regular program. This is New York, Toronto, Delhi,” he said.
According to Dykhne, UIA’s charter program for 2022 should balance the utilization of the fleet in order to keep the plane more in the air.
“There will probably be a number of charter programs on long-haul flights, because life in the pandemic has shown that when the closest neighbors are closed, the possibility of long-haul flights opens up. It is attractive to passengers. We are not naming destinations now, because this is a question of summer-autumn 2022. It is difficult to say which of the planned countries will be open and what will be attractive. But there will be a number of long-haul charters on Boeing 777 aircraft,” the CEO of the airline said, adding that these could be charter flights to Mexico, Thailand and other destinations.