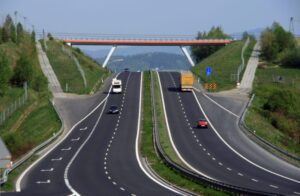 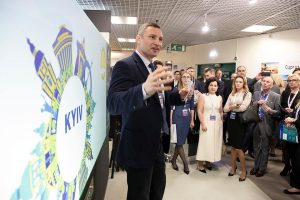 Kyiv Mayor Vitali Klitschko met with a delegation from the European Bank for Reconstruction and Development (EBRD) headed by Odile Renaud-Basso, where the sides discussed further cooperation in the implementation of environmental and infrastructure projects in the Ukrainian capital.
“This year, we plan to complete the repayment of loans under the 2007 loan agreements, which allowed us to purchase 202 new trolleybuses, some 185 buses and 50 metro cars,” Klitschko said on the klichko.org website on Tuesday.
In addition to the urban transport renewal program, the meeting also discussed a project worth EUR 140 million to modernize the heating system of the Ukrainian capital. The EBRD provided a loan for the implementation of the project to the city within the Green Cities program.
Renaud-Basso stressed the interest of the EBRD in cooperation with the municipality of Kyiv.
She said the EBRD officials see the same priority areas of cooperation: roads, bridges, transport and environmental infrastructure. They are ready for closer cooperation, as well as they are ready to continue to provide support and attract investments to contribute to the sustainable development of the city in the face of global challenges. 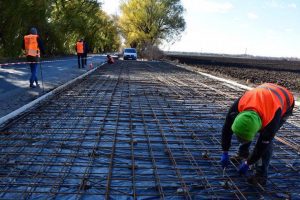 President of Ukraine Volodymyr Zelensky during a meeting with President of the European Bank for Reconstruction and Development (EBRD) Odile Renaud-Basso invited a financial institution to join the development of infrastructure projects and privatization in Ukraine, according to the website of the head of state.
“It is very important to support infrastructure projects in Ukraine, because high-quality roads, bridges and social infrastructure are important for every Ukrainian. Thanks to infrastructure projects, we created 190,000 jobs at a time when many were losing their jobs due to the COVID-19 pandemic,” Zelensky said.
The head of state also added that “privatization is one of the priorities today” and invited the EBRD to join this direction.
In addition, issues of development of the agricultural sector of Ukraine were discussed at the meeting. “It is advisable to invest in agriculture. Ukraine needs a lot of investment in the modernization of irrigation infrastructure. Its restoration will be a powerful step in the development of agriculture and Ukraine as a player in the international agricultural market,” Zelensky said.
In addition, Zelensky informed Odile Renaud-Basso about the continued implementation of the reform of law enforcement agencies, about the signing of a law in Ukraine on the creation of the Bureau of Economic Security. The interlocutors also discussed the reform of the energy sector, they talked about the implementation of energy efficiency programs, in particular, the introduction of energy-saving technologies in housing.
In addition, the negotiating parties discussed the continuation of the reform of the financial and banking sectors of Ukraine.
“Ukraine and the EBRD have good relations and many important projects in which Ukraine puts its soul, and the EBRD – its faith and money. We consider you one of the strategic financial partners. These relations are very important for us,” Zelensky said.
In turn, the EBRD President welcomed the reforms that are being implemented in various sectors of the Ukrainian economy.
The meeting was attended by Minister of Finance Serhiy Marchenko, Deputy Head of the President’s Office Yulia Svyrydenko, Advisor to the head of the President’s Office Tymofiy Mylovanov, and Head of Ukravtodor Oleksandr Kubrakov. 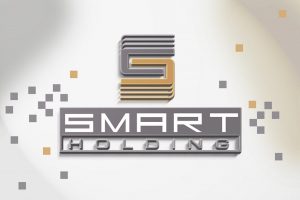 Representatives of the top management of the industrial and investment group of PrJSC Smart Holding (Kyiv) and China Railway Construction Corporation Ltd. (China) discussed the opportunities of cooperation and implementation of common investment projects in transport infrastructure and logistics.
According to the company’s press release on Friday, during the meeting, the Chinese side was presented an investment project for the development of an industrial park based on a logistics hub managed by LLC Naval Park in Mykolaiv, as well as a development project for existing sea port of Ochakiv, including dredging and construction of new infrastructure.
The Chinese side has expressed interest in the projects and will continue to study them in detail. The parties agreed to continue the dialogue and organization of visits to the relevant facilities.
Director General Oleksiy Pertin, First Deputy Director General Yulia Kiryanova, other representatives of top management of Smart Holding, participated from the company’s side. Executive Director of the subsidiary of CRCC – CRCC14 Overseas Construction and Development Co Ltd Li Junqiang and Deputy General Manager of China Railway 14th Bureau Group Wang Chuang took part in the discussion from the Chinese side.
Commercial sea port Ochakiv is located on the Dnipro-Buh estuary in Mykolaiv region on the north-eastern outskirts of Ochakiv. At present, it has facilities for transshipment of goods in the amount of over 500,000 tonnes per year. The port has five berths with depths of up to 7.35 meters. As part of the investment project, it is planned to create one of the deep-water estuary ports on the Black Sea based on the existing small port. It is planned to construct coal and grain terminals in the port, as well as a terminal for transshipment of iron ore raw materials. It is planned also to deepen the port water area to 15-18 meters, as well as to lay 70 kilometers of an underwater railway line.
China Railway Construction Corporation (CRCC) is the second largest state-owned construction company in China. It is engaged in the construction of transport infrastructure, the production of special construction equipment, residential property, as well as logistics. The company has a representative office in Ukraine. Subdivisions of the company, within the relevant memorandums with the Infrastructure Ministry plan to implement projects in Ukraine for the development of railway infrastructure, as well as infrastructure for inland waterways.
Smart Holding owns 23.76% of the Metinvest mining and metallurgical group, some 95% of shares of the shipbuilding holding Smart Maritime Group, some 99.97% of shares of the trading and financial company Santis LLC. The company also owns large assets in the fuel and energy industry, development and agricultural sector.
The main beneficiary of Smart Holding is businessman Vadym Novinsky.