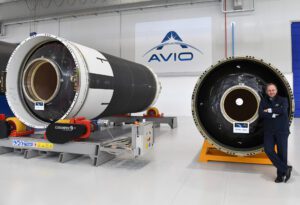 Pivdenne (Yuzhnoye) Design Bureau, Makarov Pivdenny (Yuzhny) Machine-Building Plant (Pivdenmash, Dnipro) and Italian Avio SpA have reached an agreement on additional supplies of 10 Ukrainian-made propulsion engine blocks for the Vega launch vehicle (LV) for a total amount of almost EUR 6 million, according to the press service of the Ministry of Foreign Affairs of Ukraine.
According to its Friday press release, the Italian side confirmed its readiness to expand cooperation on April 28.
“The expansion of participation in the European Vega program testifies to the reliability and competition of engineering developments in the Ukrainian rocket and space industry. Support of such contracts is one of the top priorities of the Ministry of Foreign Affairs, and the efforts of Ukrainian diplomats in Italy played an important role in reaching this agreement,” the press service said, citing Minister Dmytro Kuleba.
According to Chief Economist at Pivdenmash Dmytro Nikon, the current contract contains an option providing for the manufacture of additional 10 units.
“We are thankful to the Ukrainian diplomats who kept the case under control, repeatedly contacted both the company’s management and representatives of the Italian Space Agency, which led to a positive result,” he said.
Chief Designer of the Design Bureau of Liquid Propellant Rocket Engines of the Pivdenne Design Bureau Oleksandr Prokopchuk said that cooperation with Avio S.p.A. is a clear example of the integration of the Ukrainian rocket and space industry into European space programs.
According to the press release, the current contract for the supply of 11 propulsion engine blocks is effective until 2023. Seven blocks have already been delivered, one will be shipped to the customer in the near future, and three more are being manufactured.
The Vega light launch vehicle is a joint project of the European Space Agency and the Italian Space Agency. Pivdenne Design Bureau and Pivdenmash cooperate with the Italian Avio S.p.A. under the Vega program since 2004, during this time more than 20 propulsion engine blocks were manufactured and delivered, the last of which were at the beginning of 2021.
A feature of the propulsion engine blocks is the ability to launch multiple times during flight (up to five launches), which ensures the deployment of satellites into different orbits. Italy is one of the founding countries of the European Space Agency and is among the top three contributors along with Germany and France.