LINDSAY FROM UNITED STATES READY TO LAUNCH PRODUCTION IN UKRAINE 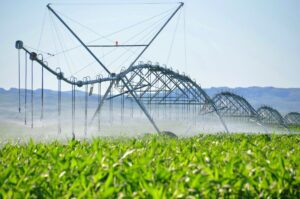 The Ministry of Agrarian Policy and Food has signed an agreement with Lindsay (the United States), a large international company, on the production of irrigation equipment and the creation of an industrial cluster in Ukraine to localize some of the products for irrigation. Minister of Agrarian Policy Roman Leschenko wrote about this on Facebook, commenting on the results of the working trip of President Volodymyr Zelensky and a number of government members to the United States made early September. “An agreement has been signed with Lindsay, the world leader in the field of irrigation equipment. It is ready to launch the production of a full range of irrigation equipment with a significant local content in Ukraine,” the minister wrote.
Leschenko said that each investment project that forms a new industry and provides new jobs will be accompanied by a profile minister in the “investment nanny” mode.
“On these terms, we will cooperate with Lindsay, because this is about creating a new cluster and a new technological base for the rational use of water resources: from pumps, irrigation machines to IT technologies, monitoring systems and artificial intelligence,” he wrote.
In addition, he recalled the $3 billion agreement signed on September 2 between Ukraine and the U.S. Export-Import Bank (EXIM), in which agriculture was named one of the priority areas of financing.