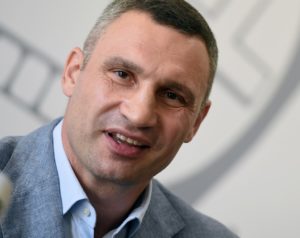 Kyiv Mayor Vitali Klitchko has appointed Maksym Bakhmatov as his advisor.
“I’m glad to introduce Maksym Bakhmatov,” Klitschko said at a press conference in Kyiv on Monday adding that the city longs for a crisis manager, who will be able to face new challenges.
According to mayor, in future Bakhmatov will become his deputy, who will be responsible for the introduction of IT in city management, investment activities issues, urban planning and anti-corruption policies.
Born in 1978, Bakhmatov is Ukrainian entrepreneur in IT and innovations sector. Through 2015-2017, he was Director General of the Expocenter of Ukraine National Complex. Previously he was TV host, producer, performer in Club of the Cheerful and Sharp-witted and Comedy Club in Kyiv.