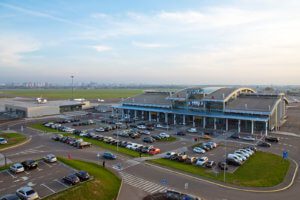 On June 14, 2018, the administrative buildings and terminals of Kyiv International Airport named after Igor Sikorsky was blocked by National Anti-corruption Bureau of Ukraine (NABU) personnel equipped with automatic weapons. From 10:00 a.m. on June 14 to 05:00 a.m. on June 15, during the 19 hours, the management of municipally owned Kyiv International Airport and the Master-Avia company, including the heads of departments, and senior employees, were kept in their own offices without any means of communication and the possibility of coordinating the work of the airport. As a result, the work of both the municipal company and the Master-Avia private company, which is engaged in the development and maintenance of the airport, was blocked.
NABU’s operation resulted in the inability to prevent an accident that occurred with a plane operated by the BRAVO airlines, which performed the Antalya-Kyiv flight. During landing amid a violent storm, the airplane carrying 169 passengers aboard overshot runway and landed on its belly. The situation was complicated by the increased threat of an explosion: there were four tonnes of aviation fuel on board, there was a threat to the lives and health of the passengers. At that time, the airport’s management, which was, in fact, hostage to the security forces, was not able to take measures that are appropriate to that weather condition. Only thanks to the coordinated work of the airport’s rescue services, the situation was under control and nobody was injured as a result of the incident. This was the first case registered within 94 years of the airport’s work.
The airport’s management did not publish the details of the incident before because of the investigation of the aviation event by a special commission. However, as there is a probability that raids and other investigative measures may continue, the team of Kyiv International Airport considers it is their duty to warn that in case of new attempts to block the airport’s work by the security forces, it will suspend handling flights for the sake of the safety of passengers and crews. The safety of passengers remains a priority for the company.
Currently, the airfield and runway are on the balance sheets of municipally owned International Airport Kyiv. Master-Avia owns terminals and an apron. There was no reason for the use of force: the company’s activities are open and transparent, the management is always ready for constructive interaction with the control authorities and for required procedures. However, instead of asking for the necessary documentation, the Bureau’s agents chose a different path – the seizure of buildings, keeping the management and personnel without means of communication, searches both at the airport and in apartments in the top managers, seizure of documents and things, including personal ones, the blocking of activity and communications in the strictly policed security facility. Such actions by state authorities negatively affect the airport’s safety and the investment attractiveness of Ukraine.
Kyiv International Airport operates strictly in accordance with international and Ukrainian legislation and today it is one of the largest taxpayers in the capital among municipally owned enterprises. Master-Avia has invested more than $50 million in the creation of new airport infrastructure, and still spends all available resources on the repayment of a loan and the development of the only international airport located directly in Kyiv.
Reference information:
In 2010, an investment tender was held under the government program for the development of Ukrainian aviation infrastructure Master-Avia LLC won the tender. The company has concluded an agreement for the lease of the airport’s property for 49 years. The second bidder, a company with Russian roots, unsuccessfully challenged the results of the tender in courts of all instances.
Today, Kyiv International Airport, being operated by Master-Avia, cooperates with more than 40 airlines, performing flights to 140 cities in 48 countries. Every month, about 2,500 flights are operated, and almost two million passengers are served annually. Investment in the airport exceeds $50 million. More than 10,000 jobs have been created. Kyiv International Airport is the second largest taxpayer among municipally owned companies.