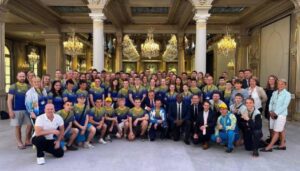 The Ukrainian national team won 11 gold, 18 silver and 19 bronze medals at the 2022 World Gymnasium in France, according to the Ministry of Education and Science.
According to the press service of the ministry, the Ukrainian team was represented by 93 students aged 16 to 18.
“During the competition, the Ukrainian team won 11 gold, 18 silver and 19 bronze medals, thanks to which our athletes are among the top ten among 63 countries. For the state to participate in such priority international competitions is a great honor, pride and responsibility,” said. Ministry of Education.
It is noted that the national team of Ukraine competed in the following sports: badminton, 3×3 basketball, boxing, wrestling, Greco-Roman wrestling, beach volleyball, gymnastics, judo, athletics, swimming, orienteering, breaking, table tennis, taekwondo, taekwondo 7, archery and fencing. 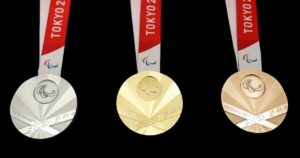 The national team of Ukraine finished its performances at the 2020 Summer Paralympics in Tokyo (Japan), receiving 98 medals, President of Ukraine Volodymyr Zelensky said.
“The 2020 Paralympics in Tokyo are over. Thanks to our athletes, Ukraine has again shown a high result and took 6th place in the overall standings! Our Paralympians won 24 gold, 47 silver and 27 bronze medals,” Zelensky wrote in his Twitter on Sunday, September 5.
He thanked each participant of the Paralympics. “We are proud and congratulate you at home,” the head of state said.
According to Suspilne, Ukrainians participated in 15 sports, in ten of which they were able to win awards. Ukraine received the most medals in the swimming category – 43 medals (14 + 18 + 11), and athletics in second place – 24 (6 + 15 + 3). At the same time, in the shooting, the Ukrainians shared the first place with China in the number of medals – six. In terms of the total number of awards, Ukraine closed the top five and showed the second best result. But in the medal standings, Ukraine finished in sixth place.
In addition to Ukraine, the top ten medal counts of the 2020 Paralympics included China (96 gold, 60 silver and 51 bronze medals), Great Britain (41 gold, 38 silver and 45 bronze), the United States (37 gold, 36 silver and 31 bronze), South Korea (36 gold, 33 silver and 49 bronze), the Netherlands (25 gold, 17 silver and 17 bronze), Brazil (20 gold, 20 silver and 30 bronze), Australia (21 gold, 29 silver and 36 bronze), Italy (14 gold, 29 silver and 36 bronze) and Azerbaijan (14 gold, 1 silver and 4 bronze medals).
In just 12 days in Tokyo, 539 sets of awards were drawn for athletes from 86 different countries of the world. This is not a record number of medals won (there were 550 sets of awards in Sydney), but a record number of countries completed the Paralympics with medals.
For the national team of Ukraine, this is the second most productive Paralympics in the number of medals, but for the first time since 2004, the Ukrainian national team dropped out of the top four medals. The last time Ukrainians finished in sixth place was in Athens in 2004.
In Tokyo 2020, Ukraine set a record for silver medals and repeated the result of Beijing and Athens in the number of gold medals.
Some 23 Ukrainian athletes have received more than one award in all time. Swimmers became the leaders in the number of medals won, and Maksym Kripak even won the “personal medal standings”, receiving seven medals. Andriy Trusov also won six medals, Yelyzaveta Mereshko won five medals and Denys Ostapchenko won three medals.