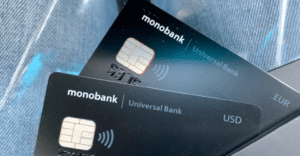 The loss of virtual monobank in the first quarter amounted to UAH 109.6 million, Oleg Gorokhovsky, co-founder of the bank, said.
“The total result of the quarter is a loss of UAH 109.6 million, including a UAH 548.2 million loss in March,” he wrote on Telegram on Tuesday.
Gorokhovsky pointed out that almost UAH 1 billion of reserves for the loan portfolio was formed in March.
“January was a profitable month, and February closed with a small plus,” added the co-founder of monobank.
As reported, in January 2017, a mobile bank without branches – monobank – was founded by former top managers of PrivatBank Roman Gorokhovsky, Dmitry Dubilet and Mikhail Rogalsky. It operates under the license of Universal Bank, which, among other things, is part of the TAS group (Kyiv).
As of December 31, 2021, the number of monobank customers amounted to 5 million people.