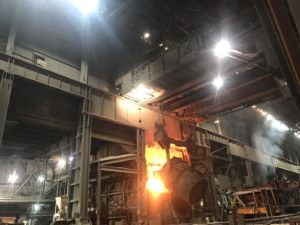 The Mining and Metallurgical Combine PJSC ArcelorMittal Kryvyi Rih (Dnipropetrovsk region) has opened a new metalware storage facility in Dnipro city with a loading capacity of 5,000 tonnes per month.
The new facility has a total area of 8,000 square meters and both indoor and outdoor storage yards, three cranes with carrying capacity up to 15,000-20,000 tonnes and its own railway spur. It can store up to 10,000 tonnes of steel products, the enterprise reported in its press release. The depot can provide services for motor vehicles as well.
As regional sales manager at ArcelorMittal Yevhen Chumachenko said, now the distribution network of the enterprise comprises nine storage facilities, two of which are in Kyiv and Lviv (two in each city), Kryvyi Rih, Odesa, Kharkiv, Ternopil and Dnipro.
Besides, according to him, the depot in Dnipro will serve as a logistic center for the certain districts of central, south and eastern Ukraine.
ArcelorMittal Kryvyi Rih is the largest rolled steel producer of in Ukraine.