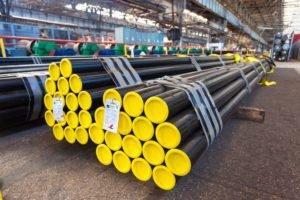 The Ukrainian industrial company Interpipe has designed, developed and tested a new connection Intrepid-SP, devised specially for the North American market.
According to the company’s press release, this product serves for the construction of directional and horizontal wells in order to extract shale oil and gas which are in hard-to-reach layers – shales, dense sandstones and limestones. Due to the “shale revolution” and new drilling technologies the United States doubled its oil production over the past decade.
At the same time, the purpose of Intrepid-SP is to maintain the column gas tightness under a complex load and ensure its safe rotation during descent. Such rotation is a necessary technological condition for the construction of horizontal sections of wells with large deviations from the vertical.
Intrepid-SP may also be used for the exploitation of traditional deposits but with hard-to-recover reserves, for example, in multilateral wells with horizontal endings or a new horizontal section is “added” to the main well of an existing well.
Interpipe CFO Denys Morozov said that to expand the line of threaded connections for oil and gas production entering new market segments.
“The new connection was developed considering the peculiarities of the North American market and is intended for companies that develop complex deposits. Intrepid-SP was tested in an independent laboratory. We are going to deliver the first shipment by the end of the year,” the top manager said.