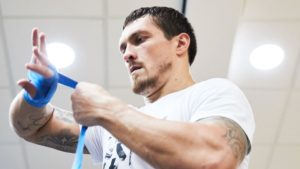 Former world cruiserweight champion Oleksandr Usyk (16-0, 12 KOs) will make his heavyweight debut at Wintrust Arena in Chicago on October 12, ZN.UA has reported, quoting manager Egis Klimas. The name of the opponent has not been disclosed yet.
Usyk was to make his heavyweight debut on May 25, but the fight against Carlos Takam (36-5-1, 28 KOs) was postponed due to Usyk’s injury. It was reported that the postponed fight would take place in October, but the Cameroonian boxer signed a contract with the Star Boxing promotion company, which could dramatically change the boxer’s plans.
Last November, Usyk successfully defended his titles, defeating Briton Tony Bellew in Manchester. Later, the Ukrainian gave up his cruiserweight belts and decided to move to heavyweight. 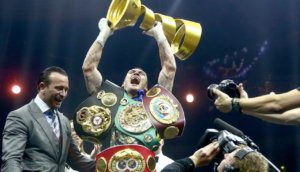 Ukrainian boxer Oleksandr Usyk has defeated Russian Murat Gassiev in Moscow to become the first man to unify four would cruiserweight belts (WBC, WBO, WBA, IBF). The fight between Usyk and Gassiev took place in Moscow in the early hours of Sunday, July 22, as part of the World Boxing Super Series (WBSS). The fight lasted all 12 rounds and the Ukrainian boxer won on points. The judges unanimously recognized Usyk’s victory – 120-108, 119-109, 119-109 in favor of the Ukrainian.
In addition to becoming the absolute world champion in the cruiserweight division, Usyk won the Muhammad Ali Trophy and the Ring Magazine title.
In September 2016, 2012 London Olympics champion Usyk became the WBO world cruiserweight champion in his tenth professional bout.