Qatari company QTerminals has won the competition for the Olvia seaport concession.
“The second concession tender has been completed. QTerminals from Qatar has won the concession tender in the port of Olvia. UAH 3.4 billion will be invested in the development of the port over five years,” wrote Minister of Infrastructure Vladyslav Krykliy on Facebook.
At the same time, he noted that this is one of the largest foreign direct investment in the port industry in the entire history of Ukraine’s independence. 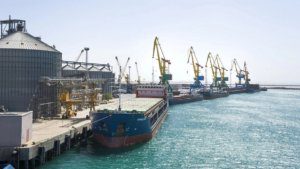 The first stage of a terminal that would handle agricultural products has been launched at the Olvia specialized seaport, the Ukrainian Sea Port Authority has reported on its website. “To date, the first stage of construction under the project has been completed, namely the construction of four silos with a capacity of 6,500 tonnes each. The construction of a storage warehouse is underway,” said BT Invest Ltd. CEO Aivaras Karalius at the Ukrainian Ports Forum 2018.
According to him, after the project is completed, the terminal will be able to handle up to 4 million tonnes of cargo per year, the throughput will be 300 trucks and 200 railway cars per day.
According to the report, the project is being implemented by the investment company BT Invest and jointly with Evrozovnishtorh LLC.
BT Invest was set up in 2008 by former stockholders in Sandora juice producer Raimondos Tumenas and the late Ihor Bezzub. The company owns the Novus chain, Stolitsa Group that implements real estate projects in Kyiv city and region and acts as an investment partner in construction of the Retroville shopping center. BT Invest also owns a business center in Lithuania. BT Invest jointly with Ukrainian partners is realizing a new infrastructure project – a seaport in Mykolaiv. Evrozovnishtorh LLC started building a grain terminal at Olvia port in 2017.