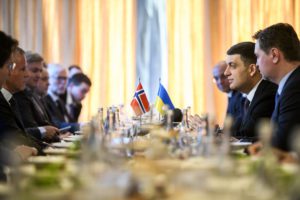 Prime Minister Volodymyr Groysman intends to visit Oslo (Norway) at the end of January of this year, where he will take part in a business forum.
“At the end of January, I plan an official visit to Norway. One of the events of the trip will be a business forum, which we will open together with the leadership of the Norwegian government,” Groysman said on Facebook.
According to the press service of the Cabinet of Ministers of Ukraine, the potential of economic cooperation between Ukraine and Norway needs to be strengthened, and this is facilitated by both the political dialogue between the countries and the expansion of the areas of economic cooperation that has been observed recently.
It is noted that now more than 50 Norwegian companies operate in Ukraine. The range of investment is not only trade in goods traditional for both countries, primarily metal and food, but also advanced technologies, in particular, green energy – solar and wind.
“The planned volume of Norwegian investments in this particular area will reach hundreds of millions of dollars. Relevant energy projects will be implemented in the south of Ukraine,” the report says.