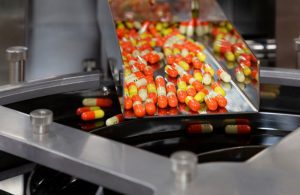 By the end of 2020, domestic pharmaceutical manufacturers can maintain sales volumes of 2019 in monetary terms, said President of the Association of Manufacturers of Medications of Ukraine (AMMU) Petro Bahriy.
“The pharmaceutical industry doesn’t have deep minuses in its output, I think that in monetary terms we will reach the same volumes as in 2019, even with a slight plus,” he said in an interview with Interfax-Ukraine.
At the same time, Bahriy noted that significant changes have taken place within the portfolio of domestic pharmaceutical manufacturers, taking into account the fact that hospitals were closed for planned operations for a significant part of the year.”
“The assortment, which provides for planned operations, has decreased, but the anticovid group has grown and there is an increase,” he said.
At the same time, Bahriy called the great success of 2020 that domestic pharmaceutical companies have preserved and developed their exports.
He also stressed that if you take the American protocol for the prevention and treatment of COVID-19, then many of the products included in it are produced in Ukraine – and these drugs “work great.”