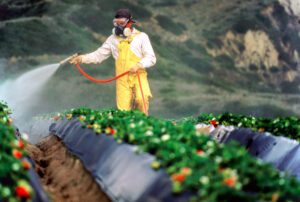 The Verkhovna Rada has adopted at the final reading a bill allowing the import of samples of innovative crop protection agents (PPP) for scientific research and state testing into Ukraine by canceling the amendment introduced in December 2015 prohibiting the testing of imported pesticides without their preliminary registration in the country of origin.
Bill No. 2289 with amendments to Article 4 of the law on pesticides and agrochemicals regarding the import of pesticides into the customs territory of Ukraine at the final reading at a session on Wednesday were supported by 291 MPs with the required 226 votes.
The rule, according to which a prerequisite for the import and use in Ukraine of samples of unregistered pesticides used for state testing and scientific research is documentary confirmation of their state registration in the country of production, was removed from Article 4 of the law on pesticides and agrochemicals.
According to an explanatory note to the document, conflicts of legal norms on the regulation of the import and use of pesticides not registered in Ukraine are eliminated, and it is allowed to use, store, sell, advertise and transport the remnants of imported agents within two years after the expiration of their registration period.