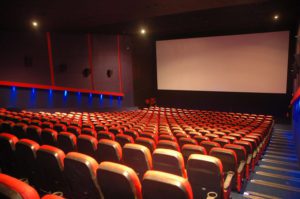 The first premium cinema of the Multiplex network will be opened in summer in Kyiv’s TsUM department store on the seventh floor and will have five halls with a total of 100 seats, the press service of the department store reported last week. According to a press release, the total area of the cinema will be 817 square meters. As reported, the total area of the seventh floor of the building with a zone of panoramic terraces, restaurants, bars and cafes is 3,500 square meters.
Multiplex-Ukraine plans to develop a new cinema format for the Ukrainian market from the point of view of the design of cinema halls, services and menus.
“Our network is represented by 129 halls in 15 regions of Ukraine. And we see great potential for further development: saturation is still far away. Even such an attractive place from the point of view of the solvent population, as the center of Kyiv, now suffers from a lack of cinemas and the situation has recently become only worse. In the center of Kyiv there is no newer and more attractive location than TsUM, so we immediately set ourselves the task of opening a cinema there,” CEO of PJSC Multiplex-Holding Vitaliy Pysarenko said.
As reported, at the end of 2016, ESTA Holding, the managing company of ESTA Group, established by CJSC System Capital Management (SCM, Donetsk), opened the eight-story Central Department Store (TsUM) with a total leasable area of 23,500 square meters after reconstruction.