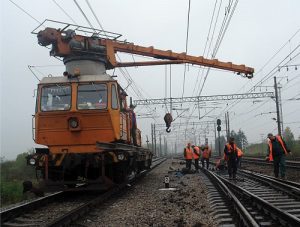 The Ministry of Economic Development, Trade and Agriculture and the Ministry of Infrastructure of Ukraine are developing a program for a radical renovation of the country’s railway industry.
At present, working groups have been created in the ministries, and regular meetings are held for relevant discussions, the press service of the Ministry of Economy said on Thursday.
“The tasks of developing the railway industry are to increase the economic efficiency and safety of transportation, as well as to protect national interests. The result should be the preservation of jobs, the revival of the car-building industry and the support of the added value of related sectors of the economy,” the press service quoted head of the department Ihor Petrashko as saying.
According to him, the specified program concerns the renovation of the park of passenger and freight cars, the purchase of new diesel trains.
Thus, the initiative to solve the problems of the freight car market is based on the introduction of restrictions on the operating age for the main groups of freight cars; encouraging demand for new railcars from Ukrainian manufacturers due to government compensation for the interest rate on loans for the purchase of railcars; restricting the import and operation of old wagons from neighboring states to Ukraine; the use of a technical tool for additional repairs and inspections of old cars, which will become more expensive in service.
“The result of the initiative should be a radical renewal of freight cars in the next 10 years and an additional GDP growth of 2.7% per year,” the minister said.
According to him, to solve problems in the passenger carriages market, one of the options may be to renew the rolling stock through partial government funding under government guarantees.
“Previously, such a program for the renewal of passenger rolling stock requires the commissioning of at least 100 new passenger cars per year … It is only possible to make our railway industry safer, more efficient and technologically advanced by concentrating the integrated efforts of all market participants. Renewal of this area is not an easy task, but especially relevant in the period of economic recovery,” the minister said.