NATIONAL ONLINE CINEMA SWEET.TV PLANS TO VOICE OVER 50 FILMS, 100 TRAILERS IN UKRAINIAN IN 2021 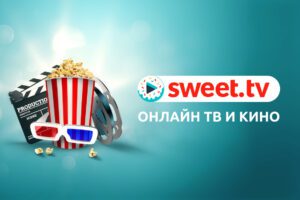 National online cinema SWEET.TV plans in 2021 to dub and voice over 50 films and 100 trailers in Ukrainian.

As director of SWEET.TV Oleksandr Rezunov said during a conference at the press center of Interfax-Ukraine, popularization of the Ukrainian language and Ukrainian-language content is the platform’s social mission.

“For us, Ukrainianization of cinema has long become the norm. That is why the ‘Hollywood in Ukrainian’ project was created – the main social project of SWEET.TV. Within its framework, we, at our own expense, implement Ukrainian dubbing and voicing of films, cartoons and TV series that have not previously been translated into Ukrainian. To implement this project, SWEET.TV became the first Ukrainian online cinema to enter into direct contracts with Hollywood film studios specifically for the territory of Ukraine, not the CIS,” he said.

According to Rezunov, during the year of the project’s existence, 181 films, cartoons and TV series received the Ukrainian-language audio track. Also, 829 trailers sounded in Ukrainian.

“By the end of 2021, we plan to dub and voice more than 50 films and more than 100 trailers. We also created our own Foundation for the Development of Ukrainian Cinema and Television, where we transfer UAH 10 from each paid connection to SWEET.TV. The collected funds are directed to the implementation of new projects of talented Ukrainian directors,” Rezunov said.

According to him, there are significant opportunities for the growth of OTT services in Ukraine: out of almost 15 million households in the country, only 4-4.5 million use pay TV services.

“Some 10 million Ukrainian households have never paid for television. They are the prospect for the development of the streaming services market, the so-called ‘growth zone’ for OTT companies,” the SWEET.TV director said.

NATIONAL ONLINE CINEMA SWEET.TV IS FOR INTRODUCTION OF LIABILITY FOR VIEWING PIRATED CONTENT

National online cinema SWEET.TV stands for the introduction of liability for the population for the use of pirated content.

During a press conference at the press center of Interfax-Ukraine, SWEET.TV director Oleksandr Rezunov said that the operation of pirate services in Ukraine is still very active, which is primarily due to high demand from users.

“This issue requires a tough reaction from the state. And the introduction of liability for consumers of pirated content. Also, due to pirated sites, Ukrainian content producers lose millions of hryvnia. This leads to insufficient funding for future projects and reduces the quality of the content produced,” he said.

According to Rezunov, the issue of developing a mechanism for introducing such a penalty is on the side of the legislative branch.

“The size of the fine I would introduce is small, purely symbolic – about UAH 100. Why is this needed? Not to take money from consumers. The main problem of the market is that people do not always understand or forget that they are watching illegal content, and the industry loses from this, the state loses taxes, copyright holders lose royalties and cannot produce high-quality content. A purely symbolic fine would lead to the fact that a person remembered about it,” the SWEET.TV director said.

To combat piracy, SWEET.TV became a member of the Supervisory Board of the Media & Communication Committee of the American Chamber of Commerce in Ukraine. In addition, the company is a member of the Clear Sky anti-piracy initiative.

The SWEET.TV director called the high activity of international broadcasting platforms another problem of the Ukrainian pay TV market.

“In Ukraine, it is necessary to introduce equal conditions for doing business. In particular, the requirements regarding language quotas are practically not applied to foreign media platforms. There is no practical implementation of tax norms – now the adopted regulatory legal acts introducing VAT payment by nonresidents who provide online media services simply do not work,” Rezunov said.

He also stressed that Russian streaming services available on the territory of Ukraine, in fact, violate Ukrainian legislation in terms of the unhindered broadcasting of content from Russian media that have come under sanctions.